Keeping a diary in the digital age

Keeping a diary in the digital age 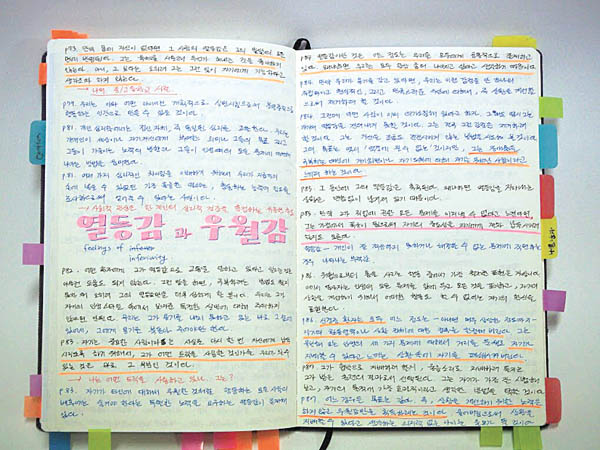 Shin Jeong-cheol fills his diary with his feelings, ideas that come to mind, thoughts about books he read and basically everything that happens during his day.

One of the great January traditions used to be getting a new diary for the new year.

With the rise in smartphone use and the introduction of an array of apps where you can keep track of your schedule, punch in to-do lists, jot down notes and even manage your finances, this analog organization tool has become somewhat unnecessary and time-consuming.

But still, for some people, there’s no better feeling than buying a new diary for the new year and filling in the blank pages with handwriting and doodles, pictures and drawings. Looking back through the pages of the diary is sure to give you the feeling of pleasure from reflecting on the year.

But of course, not everyone is great at keeping a diary until the end of the year. Many people end up losing or giving up on using the diary after the first three months. The so-called masters of diary writing say the most important part is not trying to make it so perfect from the start.

Updating your diary every day or regularly is the key, even if it means jotting down the usual litany of what you did and what you should have done. Experts say it is these minutiae that make diary so valuable in a decades’ time.

To learn more about how these masters of diary-writing manage their diaries, the JoongAng Ilbo met with four of them to get some tips.


Create your own story

Shin Jeong-cheol, 41, who blogs about keeping a diary, has three of his own: two physical notebooks and one smartphone memo app. One notebook is his personal diary and the other is his scheduler for work. 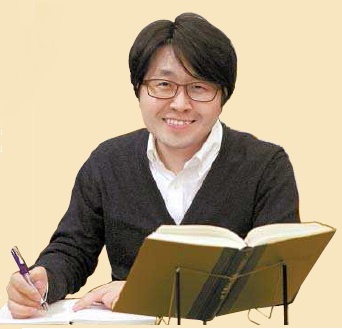 Shin, who also works as a senior researcher at LG Electronics, has been operating his blog, “Mind Watching,” since 2014. Shin writes about how he, an engineer who had no writing skills, has become a master of diary-keeping. Within a year of blogging, more than 2 million people visited his blog and “liked” his page.

At first, Shin’s diary entries were so simple they were almost like memos. Then he gradually began writing down goals, lists of books to read, schedules for work and meeting minutes. After awhile, he decided to divide work-related matters and personal thoughts into separate notebooks. For ideas that pop into his head, he uses his smartphone app to jot them down.

“The greatest advantage of writing a diary is that you can create something with your thoughts,” he says.

Techniques or formats are not important, Shin stresses. What’s important is the habit of writing.

Many people write things on their computers and save them digitally, but when Shin does so he prints them out so that he can stick them in his notebook. His work notebook even contains printouts of important emails. “When I open my notebook, I can see everything in one place,” Shin says.

“When I look at my work notebook and the tasks I did that day, I feel very proud that I’ve worked hard that day, or feel that I should’ve worked harder,” he says. “Just by keeping a simple log of your day, you can capture the joy, anger, sorrow and happiness of your life. You can remember back to your happy moments. You can examine yourself and learn about yourself - what you like and what you dislike, what you want and what you don’t want. And gradually, you attitude towards life changes.”

Shin says he used to be a typical hardworking salary worker, but since he started keeping a diary he has become more focused on the quality of his life.

Shin Dong-il, 47, deputy general manager at the KB Daechi PB Center, has been keeping a diary for the past 20 years. He calls it “My Life Book.” He writes not only his daily schedule but also his goals and desires. 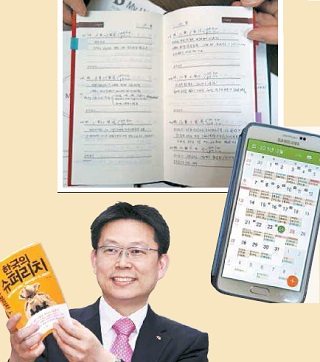 Shin Dong-il’s diary features brief summaries of his daily activities and where he spent his money. He also uses a smartphone app for his work schedule.

In 2002, Shin became the first private banker in Gangnam District. He manages the assets of many of the richest people living in the area. At his work, he noticed a trend among his clients: most of them carry diaries or notebooks.

“No matter how busy they are, they physically write down the expiration dates of their installment savings and things like that.”

Shin says there are three keys inside the diaries of the wealthy. First, they write at least one sentence every day and put it into action. Second, they have their reasons or goals for saving money written down in their own handwriting. Third, is that they have detailed road maps of how to achieve their goals.

Shin suggests writing things out by hand rather than using smartphones or computers. “I heard that people can get inspired the most and have new ideas when they are using their hands,” he says. “Although it seems like a silly idea at first, just continue to write them on paper and one day it could develop into a great idea.”

In 2013, he published a book titled “My Life Book,” which introduces the know-how and investment techniques of the country’s top 1 percent.

In his own diary, Shin writes down the highlights of the day and things he feels thankful for. There’s also a space for him to write where he spent his money. Every month, he compares is income and expenses. He also documents his investments.

Shin says it’s also good idea to jot down ideas for making money. Even if you don’t have any plans to start a business, just write them down any good ideas you have.

“Don’t be obsessed with writing out a perfect business plan or perfect investment plan,” he says. “Just write down things in your own way and you’ll figure out your own way of keeping a diary. Then you’ll find your own way of living the life you want.”

Lee Hye-sun, 43, blogs about her domestic life. In fact, her blog is in the form of a diary that is available for readers to read online. 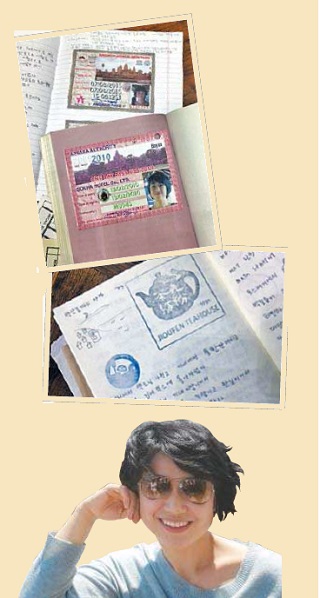 Won Na-young’s travel diary is filled with stamps, tickets and photographs from her trips.

Seven years ago, after quitting her job, Lee became a full-time housewife. That’s when she started keeping a diary and blogging.

“I started having a family of my own and became busy with household chores, but at the same time I felt like all those ideas and thoughts in my head were disappearing and drying out,” Lee says.

“I was the kind of person who dreamed of having a great future, but when I found myself buried under household chores every day, I wanted to change my perspective and see this not as housework but as my life and make a story.”

Before keeping a diary of her life, all she did was keep track of household spending on paper. She says she wrote down all the details of where she spent money. “When I read them over, it was like, ‘I used taxi today, I should walk tomorrow.’ It was all about how I could tighten my belt a bit more.”

She said she stopped doing that and began writing about her life.

Lee writes about her the know-how she has learned from keeping a small vegetable garden, tips on cleaning, organization and household storage, as well as interior decorating ideas and DIY tips. She doesn’t write every day but whenever she feels like she needs to and wants to.

“One by one, it may seem like nothing, but altogether after a month, a year, two years and a decade, it becomes a history,” she says. “With it, you can examine yourself, you can be thankful, and enjoy your life a bit more.”

Former flight attendant Won Na-young, 39, has written three travel diaries in 10 years. When she worked as a flight attendant, she traveled the world and had the opportunity to various stopover cities for one or two days at a time. 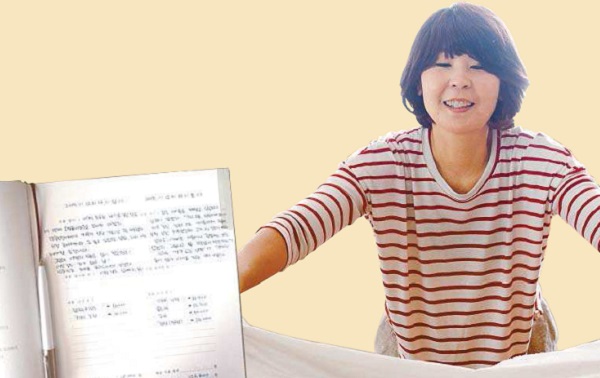 Lee Hye-sun keeps a diary about her life as a housewife, as well as a blog.

But after visiting so many cities, she realized she couldn’t remember anything. That’s when she started keeping a travel diary.

“Unless I make a record of where I’ve been, what I’ve seen and whom I’ve met, I can’t clearly remember the moment and treasure it,” she says, adding that before she started writing a diary, she couldn’t really give a clear answer when somebody asked her about a city she’s travelled to. Now, she’s got all the answers.

In the pages of her travel diaries, she wrote down even the littlest details like the price of a coffee she had at a small cafe one evening and a type of a flower she saw in a small garden in front of a train station. That way, she says she was able to find happiness and gratitude in even trivial things.

“When we travel, we are sensitive to the weather,” she says. “I tend to write a lot about how thankful I am to have such nice weather. How great it was to see the sunshine. How nice it was to see such a pretty flower as I walked from this station to the next. Normally, I would just walk by these trivial things, but by writing them down on paper, I can be thankful. Such feelings seem to make my life more abundant.”

Her diaries are not at all colorful or flashy.

“At first, I tried keeping it all nice and pretty, trying to draw things and color them in, but I realized it’s difficult to keep that up every day,” she says. “My goal was to just write things every day for the whole year, and I think that’s the trick to keeping a diary for a long time.”

After she got the hang of writing every day, she started to add prints of photos she took with her smartphone. Underneath, she notes the date and place, such as “October 2015, London.”

“When you go back and look at your smartphone, you can’t remember back to all the moments, but by having them printed and writing just a few words underneath helps you remember back a lot clearer.”