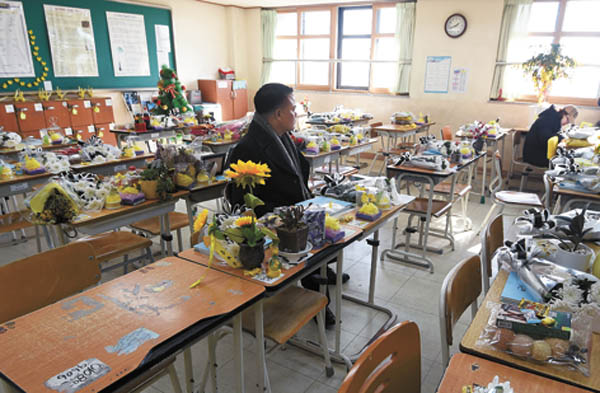 Following a memorial service Tuesday, the father of a student who died in the 2014 Sewol ferry disaster sits at the desk where his child used to study at Danwon High School in Ansan, Gyeonggi. [NEWSIS]

The high school graduation ceremony for the surviving students of the 2014 Sewol ferry disaster was held Tuesday in Gyeonggi, punctuated by a somber silence in remembrance of the 250 fellow 11th-graders who perished in the tragedy.

“The Sewol disaster came to us as a long winter. … It was too tough and long a journey for us to have to walk past so many pairs of staring eyes when we returned to school.

“However, please don’t forget this. Our days in school were not in vain,” a representative of the graduates said, reading out a letter at the ceremony that received a long applause.

Of the 86 students who graduated on Tuesday, 75 survived the Sewol ferry sinking. However, 250 of their peers never returned, perishing in waters off Korea’s southwestern coast on April 16, 2014, after the Sewol ferry began to list and ultimately sank.

The number of graduates Tuesday was only a quarter of 343 who entered the Danwon High School in Ansan, Gyeonggi, in 2013.

The ceremony was held behind closed doors and only the family members of the students who had designated red invitation cards were allowed to enter the school.

“It was a solemn and calm ceremony. Some people wept, but in a quiet manner,” said an officer from the Gyeonggi Provincial Office of Education, who attended the ceremony.

“Although my nephew has a strong spirit, he said [ahead of the graduation] that he often remembered his friends,” said the uncle of one of the students who survived the accident. “I hope he can live a good life after having overcome this ordeal and enter the college of his choice.”

An honorary graduation ceremony for the 250 students who died in the disaster was initially planned to be held on Tuesday in conjunction with a ceremony for the survivors. However, it was canceled after the families of the deceased decided to hold it until after the nine victims still lost at sea have been found. Instead, the families and friends of the victims headed to a joint altar in Ansan to hold a memorial service and offer flowers.

At the altar, Yoo Gyeong-geun, the spokesman for the Sewol Family Countermeasure Committee, read a message to his late daughter’s surviving friends on behalf of the families.

“We hope the memory of your friends and teachers who died is not a burden that you want to forget. And you don’t have to think you must live a better life for them,” Yoo said. “Please live confidently and do your best to achieve your dreams.”

The school and the office of education, which plan to accept 300 new students in March, said it will set up a separate place to commemorate the victims and offer the classrooms to new students.

On April 16, 2014, the Sewol ferry was headed for Jeju Island from Incheon with 476 people on board, mostly Danwon High School students on a school trip. After a sudden turn off the southwestern coast, the ship began to list and ultimately sank.

Only 172 people were rescued, and 304 passengers went down with the ship. After months of searching, the remains of just 295 passengers and crew members were recovered from the wreckage at the cost of the lives of two divers. The bodies of nine victims still remain unaccounted for.