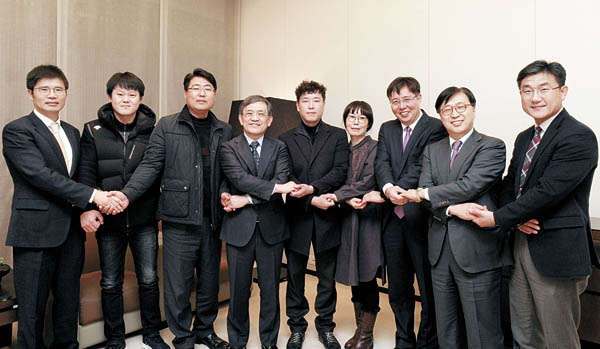 Samsung Electronics’ Vice Chairman Kwon Oh-hyun met with the relatives of workers who died of diseases allegedly caused by toxic chemicals at the company’s semiconductor and LCD factories to offer apologies and condolences.

The gathering on Thursday came two days after the three parties involved in the nine-year dispute - Samsung Electronics, a family countermeasure committee consisting of sick ex-workers or the relatives of those who have died and civic group Banolim - signed an agreement to establish an independent body overseeing toxicity levels at the company’s manufacturing facilities.

The measure is one of three terms proposed to resolve the conflict, along with an apology and financial compensation, suggested by an arbitration committee representing the three parties.

Samsung has concluded that the dispute has come to an end.

“The three key issues for the settlement have all been resolved after the prevention issue was agreed upon by the three parties on Jan. 12 and the apologies were delivered today,” said Samsung in a statement.

The family countermeasure committee was launched by six former Samsung factory workers with different types of cancers including leukemia, and family members of some that had died of such dieseases.

They spun off from Banolim, a hardline organization that includes both the relatives of victims and civic activists, after its negotiation with Samsung stalled.

The meeting did not engage Banolim, which still demands a separate negotiation over the compensation issue, refusing to accept the guidelines offered by the arbitration committee.

“We were negligent to some extent when it comes to understanding your pain and are sorry for failing to address the problem earlier,” Samsung’s Kwon told the members of the family countermeasure committee at the Samsung Electronics headquarters in Seocho, southern Seoul.

“I sympathize on the point that we should forget about the past and take future-oriented steps,” said Song Chang-ho, leader of the victims’ families.