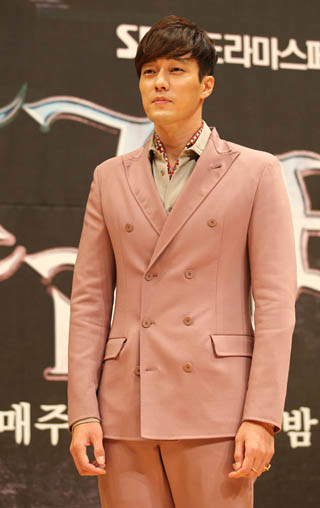 Actor Hwang Jung-min of last year’s hit film “The Himalayas,” So Ji-sub (pictured) of the drama series “Oh My Venus” (2015-16) and Song Joong-ki of “A Werewolf Boy” (2012) have finalized their appearances in the upcoming historical film “Gunhamdo,” according to the production company for the film.

“Gunhamdo” is set in the Japanese colonial era (1910-45) and it depicts the story of about 400 Koreans who are forced into labor but later attempt to escape Gunhamdo, a remote island located in the Sea of Japan.

The film will be directed by Ryu Seung-wan, who took the helm of “Veteran” (2015), which attracted more than 10 million moviegoers after it was released in August last year.

Hwang will play the role of a father who goes to any lengths for his daughter while So will take on the part of a gangster. Song will depict an independence fighter.

The film is in the preparation stage and will be released sometime next year.