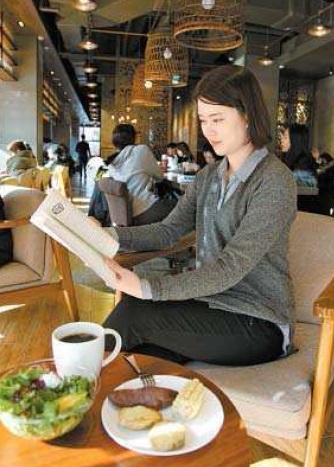 A customer reads a book at a Starbucks branch in Jongno District, central Seoul. [STARBUCKS KOREA]

These days, more Koreans are visiting coffee shops alone, leading companies to update their strategies by changing up their food menus and seating options.

Starbucks Korea, the most popular coffee chain in the country, analyzed data and discovered that the number of solo customers increased 33 percent last year compared to 2014.

That rate is more than twice as high as the rate of overall customer growth, the company said Thursday.

The company calculated the number of solo visitors, which are called naholojok or loners, by analyzing customer receipts, based on the assumption that solo visitors mostly buy a single coffee or food item.

“In past years, many visited Starbucks with their friends, lovers or coworkers, but it has become a routine for many people to enjoy time on their own as of last year,” said Baek Soo-jung, a marketing executive for Starbucks Korea.

Out of a daily average of 300,000 to 350,000 customers who visited 860 Starbucks cafes nationwide last year, roughly 30 percent went alone, the company said.

An increasing number of customers visited cafes alone for a quick meal. Sales of brunch sets at Starbucks saw a 30 percent year-on-year increase last year, which mirrored the increase in single customers.

Based on these findings, the company decided to strengthen its menu of meal replacement foods. Recently, the company added Greek yogurt, ricotta salad and quinoa and chicken salad to its menu.

The two sets, made with domestically produced ingredients, have seen sales twice as high as originally forecast, with monthly sales of 14,500 and 19,500 units, respectively.

The total size of the coffee shop food market currently amounts to 1 trillion won ($97 billion) and is expected to further expand, according to industry insiders. Therefore, the naholojok are seen as the future growth engine for the industry.

Each Starbucks branch is also increasing the number of single-person seats to better cater to these customers. Most notable are the branches on Baekyang-ro, the street in front of Yonsei University in Sinchon-dong and near Gwanghwamun Station in central Seoul.

These shops have added many different types of solo seats, including large bar-style counters. Starbucks will further expand the number of single seats, mostly in areas near universities and with young populations.

Other cafes have also acknowledged the trend and are shifting their focus to food items in addition to coffee.

The coffee chain will also add a croque-madame, or grilled sandwich with ham, cheese, bacon and poached egg, by the end of this month.

The meal-replacement items it tested in October at selected branches generated a positive response from female customers in their 20s and 30s, who comprise a large portion of naholojok visiting the cafe. As a result, the company will expand the menus at all branches this year.