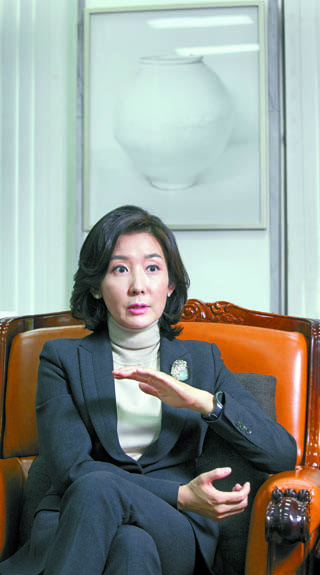 Rep. Na Kyung-won, the chairwoman of the National Assembly’s Foreign Affairs and Unification Committee, says it’s important to maintain the “culture channel” despite the tumultuous political landscape of the peninsula. [PARK SANG-MOON]

Tensions are high between Seoul and Pyongyang after North Korea conducted its fourth nuclear test earlier this month.

Although the recent developments are already affecting inter-Korean exchanges politically, economically and socially, there are those who are desperately hoping that they won’t damage cross-border collaboration in the cultural arena.

One of them is Rep. Na Kyung-won of the ruling Saenuri Party, who is also chairwoman of the National Assembly’s Foreign Affairs and Unification Committee.

“We call it the ‘culture channel,’” she said in a recent interview with the Korea JoongAng Daily, referring to cultural exchanges between Seoul and Pyongyang that have been few and infrequent, yet not nonexistent. 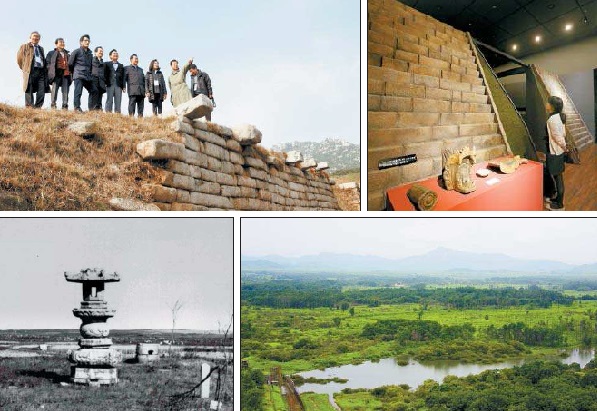 Clockwise from top left: Rep. Na Kyung-won was one of the South Korean lawmakers who visited Kaesong in November to inspect Manwoldae, the 10th-century royal palace complex; Seoul and Pyongyang both held exhibitions on the joint excavation at Manwoldae - pictured is the exhibition in Seoul; Na is hoping that the two Koreas will also explore a site located within the demilitarized zone; The castle in the DMZ was built by Gungye (unknown-918). [JOONGANG ILBO]

She is one of the vocal advocates of the culture channel and the idea that it be maintained no matter what happens geopolitically.

“Previously, when inter-Korean relations were at their lowest, Seoul only maintained the channel for humanitarian matters,” she said when asked if it isn’t too naive to think that cultural exchanges can really be unaffected by politics. “But I hope Seoul will also maintain the culture channel. We can make it happen, and that’s the first step in improving inter-Korean relations.”

In November, Na and several other lawmakers on the committee got a rare chance to visit the site of the 10th-century royal palace complex known as Manwoldae in Kaesong, North Korea, where archaeologists from the South and the North have been conducting a joint excavation since 2007. Although it was her first visit to the site, she feels somewhat fond of Kaesong, as her husband’s ancestors are from that city.

“That North Korea allowed the visit is a positive sign that when it comes to cultural exchanges, the North can be quite open and flexible,” she emphasized. Pyongyang has been denying visits by South Korean politicians, particularly since a new set of sanctions was implemented in 2010 in retaliation for North Korea’s sinking of a South Korean warship. South Korean politicians only managed to visit the joint industrial complex in Kaesong once in 2013.

Late last year, expectations grew over the joint archaeological exploration in Manwoldae, as archaeologists announced on Dec. 2 that they discovered what may be movable metal type made before 1361 at the site of a royal palace from the Goryeo Dynasty (918-1392).

The type is among some 3,500 relics found at Manwoldae during the latest round of excavations from June 1 to Nov. 30, 2015. In total, archaeologists have excavated more than 10,000 artifacts from the site, including various roof tiles and blue celadon pieces, since 2007.

The committee was also able to gain approval for an increased budget for the joint archaeological exploration at Manwoldae, from last year’s 3.4 billion won ($2.8 million) to between 5 and 6 billion won.

Now, Na is focused on launching new projects modeled after Manwoldae. For instance, she is involved in generating support for jointly excavating a 10th-century castle built by the self-proclaimed King Gungye (unknown-918) in what is now the demilitarized zone.

Below is an edited excerpt of the Korea JoongAng Daily’s exclusive interview with Na.

Q. You visited Manwoldae and the Goryeo Museum, where the findings from the site are being displayed, in Kaesong. What were your impressions?

A. It was really regrettable. The archaeologists have so much to work with at Manwoldae, but the lack of budget and personnel slowed the process. Also, part of the site and some of the relics weren’t being preserved properly. And the Goryeo Museum has a lot of room for improvement. I believe South Koreans can help with display techniques, conservation methods and more. In the past, North Korea got help from countries like China and Japan. I felt that we weren’t doing our duty to our descendants or the future generation since the two Koreas had not worked together actively to preserve their shared history.

For the Manwoldae projects, there are three parties involved: the scholars, the government or the Unification Ministry, and the National Assembly. What do you think is the most important thing for the three parties to keep in mind?

The harmony among the three is the most important. While the scholars take the lead, the government must back up the initiative by providing the necessary administrative support. As for the National Assembly, we have earmarked increased budget for the inter-Korean project, as well. But equally important is the public’s support. Also, I recently got to meet with Irina Bokova, director general of Unesco [on Dec. 7]. I asked for Unesco’s interest in North Korea’s cultural properties and its attempt to add them on to Unesco’s list of World Heritage Sites and others. She responded positively.

You have also been pretty vocal about jointly excavating the 10th-century castle built by Gungye in what is now the demilitarized zone. But because the site is in the DMZ, some say the chances are slim it could actually happen.

It would be a difficult process, as we would also need approval from the United Nations Command Military Armistice Commission. There also has to be a close cooperation between the South Korean government and the UN commission. But what we are emphasizing is that before there is an excavation, there at least has to be a joint academic investigation.

There are some who say not much would have been left at the site, since Gungye of Later Goguryeo (901-918) was there only briefly. That’s why we cannot help but ask, why the Gungye Castle? And why the DMZ?

It is true that we may not come across as many relics as we did at Manwoldae, as Gungye was there briefly and it’s not like a long-running dynasty flourished there. However, I believe that just the North and the South doing something together in the DMZ delivers a strong message of peace. And once we begin to use the DMZ in that way, it could open the way for other, more creative ways to utilize the DMZ. And once we open up the DMZ, we could open up other gates, too.

Do you really believe that culture can be totally free from the politics?

It’s like what Nobel Prize-winning author Gunter Grass once said: Germany was divided ideologically, but never culturally. South Korea and North Korea have a shared memory and that’s what history is about. Joint projects on cultural properties that are based on shared memory and shared history, I believe, are the easiest and the most ideal way to build mutual trust. They are also something that should be separate from politics for the sake of preservation of mankind’s cultural heritage.