Moon vows to quit and entreats liberals to unite

Moon vows to quit and entreats liberals to unite 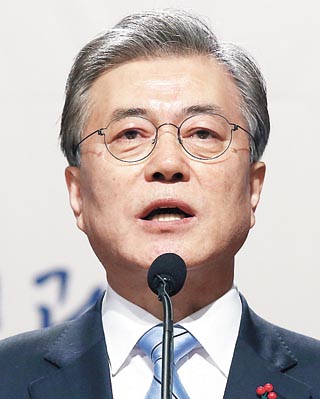 Proposing an electoral alliance with his rival liberal politicians, the leader of the largest opposition party, Moon Jae-in, said Tuesday he will step down as chairman of the party and surrender authority to a committee ahead of the April general election.

Moon said he has faith in Kim Chong-in, a strategist recruited to head the campaign committee. He also said he will consult with the party’s Supreme Council members and that the transfer of authority won’t take long. “For a righteous path, I am ready to make a sacrifice,” Moon said.

Moon, the opposition’s failed candidate in the 2012 presidential race, was elected chairman of the largest opposition party on Feb. 8, 2015. As part of a roadmap to reinvent the party, Moon, last week recruited Kim, the architect of President Park Geun-hye’s economic policy in the presidential campaign of 2012, to head the general election campaign.

Over the past months, Moon has faced nonstop challenges from key members of his party. Many demanded his resignation from the chairmanship and some, including former presidential contender Ahn Cheol-soo and veteran lawmaker Chun Jung-bae, abandoned the Minjoo Party and launched their own political groups.

Moon formally proposed to smaller groups a joining of forces for the general election.

“Until now, we had unofficial talks with Chun’s party and the [minority opposition] Justice Party [to form an alliance], but no outcome was produced,” Moon said. “We are running out of time. I am proposing to have public and formal negotiations.”

In a question-and-answer session, Moon further elaborated on the election alliance proposal.

Chun, a five-term lawmaker, left the party in January to create his own political group with supporters mainly in Gwangju and Jeolla regions. The Justice Party, headed by Rep. Sim Sang-jeong, is a minority liberal opposition party with five lawmakers.

Ahn abandoned the main opposition party in December and launched the People’s Party. At least 15 lawmakers of the Minjoo Party followed Ahn.

“Campaign Chairman Kim has no disagreement with the belief that the liberals must unite and form an alliance for the general election,” Moon said. “I will do my best even after resigning from the chairmanship.”

“Those who left the Minjoo Party have demanded my resignation and justified their leaving with my refusal,” Moon said. “I hope my resignation will reignite the liberals’ discussion to join forces.”

Moon also said he won’t run in the April general election, not even as a proportional representative, and will give up all other posts including the head of the party’s talent acquisition committee.

“No matter what position I am in, I believe I must take ultimate responsibility for the general election outcome,” Moon said. “If we fail to find hope to win the next presidential election through the upcoming general election, I must accept the limit of my ability.”

It remains to be seen if Moon’s proposal for a liberal alliance will be concluded before the April election. Ahn has been adamant that he will not form such an alliance, in which both parties will unite behind single candidates in races, with the Minjoo Party.

In a statement, Ahn criticized Moon’s election strategy and questioned his principles.