Up until last fall, 39-year-old office worker Kim Ji-seok was renting his apartment in Nowon District, northern Seoul under a jeonse agreement, a long-term deposit contract that is usually guaranteed for two years.

The housing market last year saw all-time record transactions as people like Kim, who were living on jeonse agreements, decided to finally buy an apartment. 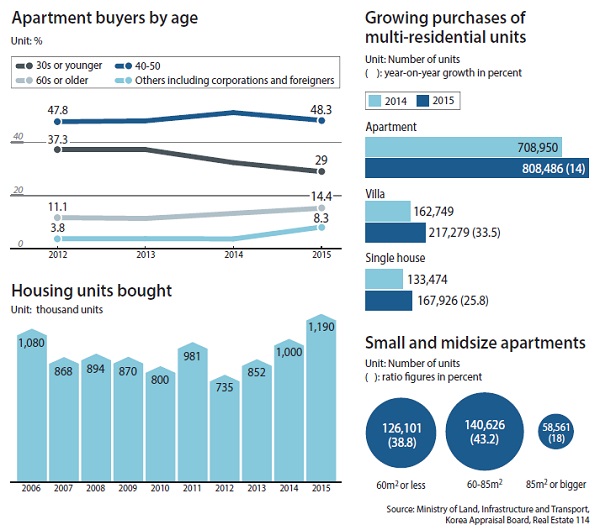 According to the Ministry of Land, Infrastructure and Transport last week, last year 1.19 million apartments were bought. That’s the largest number of apartments traded in a year since data was compiled in 2006. And when compared to 2014, the figure is 18.8 percent increase. The sales of apartments are especially higher in the greater Seoul area than in the rural provinces. Apartment transactions in the greater Seoul area amounted to 612,000, which is a 32.4 percent year-on-year increase, while those in other cities and regions grew 7.2 percent to 582,000.

Experts say the reasons so many renters bought homes last year was largely due to the continuous rise of jeonse prices and low loan interest rates.

According to KB Kookmin Bank, last year the average price of jeonse apartments in Seoul rose 56 million won, which is about the same level as in 2014. Considering that most jeonse contracts are guaranteed for two years, those who rented under jeonse since 2014 will see their jeonse prices rise more than 100 million won by the time their contract expires and they either need to pay the increased amount or end the contract and move out.

“As jeonse prices have been surging with such intensity and loan interest rates stay low, people that have decided to buy apartments increased significantly,” said Park Won-gap, who specializes in real estate at KB Kookmin Bank.

This is part of the reason why demand for cheap housing units such as low-rise housing complexes with multiple residential units and small apartments 85 square-meters or smaller rose as well.

Thanks to such rising demands, villa transactions last year rose to an all-time high of 217,279 units, which is a 33.5 percent surge year-on-year.

Buyers also flocked to small and midsize apartments that are relatively cheaper.

“The reasons demand for villas and small and midsize apartment rose is largely because people who lived on jeonse and monthly rent decided to switch from living on rents to owning their own homes,” said Kim Eun-jin, a researcher at Real Estate 114.

When the jeonse prices in the northern part of Han River went up to 80 percent of the apartment’s market value, those who purchased apartments that already has jeonse tenants flocked to buy, adding to the growing sales figure last year.

These are people who want to profit from a small investment since they purchased the apartment from the previous owner without the jeonse deposit, because the new owner would have to pay the jeonse to tenants when they move out.

Such investors purchased these apartments because usually when jeonse prices go up it pushes up the apartment value as well. If the tenants decide not to extend their contract, the new owner would have to pay the tenants large-sum deposits, and they could profit from selling the apartment whose value went up. “Short-term profiteering that targeted relatively low-priced apartments in northern Seoul and in areas like Daegu and Busan where jeonse prices surged, became popular and contributed to the active trading in the housing market,” said Lee Nam-soo, head of the real estate team at Shinhan Investment Corp.

Another contributing factor was the aggressive investment activities of retired people in their 60s.

According to Korea Appraisal Board people in their 60s accounted for 14.4 percent of apartment buyers last year.

That’s 1.7 percentage points higher than in 2014. Those in their 40s and 50s accounted for 48.3 percent, a drop from 51.2 percent the previous year. The increased participation of retirees in their 60s was largely due to people in this age group seeking secure long-term income as life expectancy has gone up to more than 80 years old.

“Among retired people there are increasing cases where they sell off their large apartments and purchase two small ones or those who purchase villas so that they could lease the additional residential units,” said Shim Gyo-eon, a real estate professor at Konkuk University.

When looking at last year’s trend, experts say this year’s real estate market will be very much similar because of the so-called jeonse crisis, where the long-term deposit rent apartments will be in a shortage and therefore further pushing up its prices.

The market expects massive relocations as many apartments in Gangnam, southern Seoul, will likely start reconstruction and redevelopments, while this year the completion of new apartments are expected to amount to 103,700 apartment units, which is only 10,000 more than last year.

Although there are growing expectations that loan interest rates are going to be raised once the central bank starts raising the key borrowing rate as a result of the U.S. Fed’s gradual raise of its interest rates, experts forecast that since the local loan interest rate is so low, it won’t be a problem.

“For people who don’t own a home, the rising jeonse prices will have a larger pressure than the interest rate,” said Kwon Dae-joong, a real estate professor at Myongji University. “This year, like last year, we will continue to see a large number of people who are living in rented accommodation converting to buying apartments.”

But there is also the possibility that apartment sales could drop as the government plans to tighten mortgage loans in the greater Seoul area next month and in May for the rest of the country. The Korea Appraisal Board projected this year’s apartment transactions to fall roughly 10 percent compared to last year to 1.08 million.

“This year, other than retirees, the so-called ‘echo generation’ [born between 1979 and 1992 and referred to as the second baby boomers, the children of the first baby boomers] who are in their 20s and 30s will become major consumers on the real estate market,” said Chae Mi-ok, head of real state research institute at Korea Appraisal Board. “There are negative factors such as rising interest rates but the transactions will likely maintain the level of 2014 due to the growing demands and the jeonse crisis.”