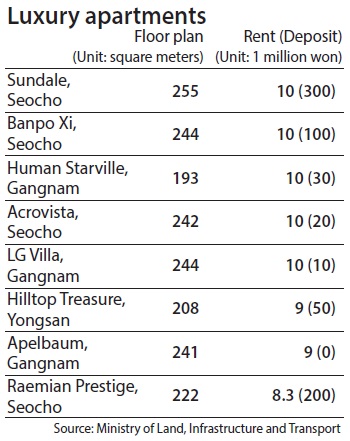 There were total of 43 apartments where their monthly rent was more than 5 million won ($4,174) last year, which is up 72 percent from 25 in 2014, according to real estate firm Real Today from data from the Ministry of Land, Infrastructure and Transport.

The average monthly rent of the top 10 luxury apartments was 9.10 million won, up 7 percent from the previous year’s 8.44 million won.

Sundale Apartment in Seocho, southern Seoul, was the most expensive apartment to rent. Renters have to put down 300 million won for a security deposit, and pay 10 million won per month for a rent. Jeonse (lump-sum deposit rent contracts) price for this apartment unit is 1.8 to 2 billion won.

Rents at apartments in southern Seoul including Acrovista, Human Starville and LG Villa were all above 10 million won as well.

Most of the luxury apartments were concentrated in districts in Seoul such as Gangnam, Seocho and Yongsan.

“Demand for the luxury apartment is very high in these areas since a large number of big companies, embassies and foreign businesses are located there,” said Chang Jae-hyun, a team leader at Real Today.

“A limited number of jeonse apartment units available in the country led to this phenomenon of increase in high rent rates.”