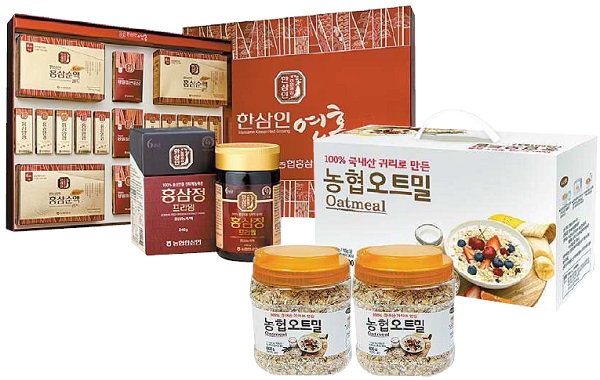 Lunar New Year is a time when Koreans send gifts to their friends and family, and to help customers celebrate a little more affordably, Nonghyup Hanaro Mart launched a special discount event on Jan. 22. A wide range of products, from fruits and meats to processed goods, will be available, and the promotion will last through Feb. 7.

Gift sets are also subject to discount. Nonghyup’s signature brands Ddrane and Achimmaru will offer sets worth between 30,000 won ($25) up to 100,000 won, which will then be discounted up to 30 percent during the promotion period. In addition to grocery sets, Nonghyup also released sets with daily necessities like toothpaste and shampoo.

The fruits and food typically placed on the tables for ancestral rites - a Korean tradition that takes place on Lunar New Year’s Day - will also be discounted. For those who find it difficult to choose the right set, Nonghyup is planning to sell gift cards in more than 2,100 Hanaro Marts. These vouchers will be usable at every Nonghyup affiliate in the country.

Additional benefits for consumers who buy from Nonghyup Hanaro Mart during the promotion period include: a 30 percent discount when certain credit cards, including the Nonghyup card, are used; gift vouchers for customers who buy products worth more than 500,000 won; group discounts such as 3+1 or 5+1; and free parcel delivery service for those who spend above a certain amount.

Nonghyup Hanaro Mart predicted this year’s most popular gift item will be fruit. Despite last year’s drought, recently grown fruits have been small in size but contain high sugar content, and were available at relatively low prices due to the rise in output. For several popular products, including Ddrane apples and pears, customers may receive a 3,000 won discount if they pay with an affiliated card.

Other than fruit, Nonghyup has also prepared red ginseng and mixed rice sets. Nonghyup’s red ginseng brand Hansamin will be discounted up to 50 percent maximum. The company’s new line of mixed rice gift range in price from 10,000 to 40,000 won, and is a cheaper option compared to other sets offered by the company.

“Nonghyup Hanaro Mart will continue to provide various choices for consumers who wish to express their gratitude to those who are close to them” said Lee Sang-wook, CEO of Nonghyup Agricultural Business Group.