Nam gets an unexpected visitor during Doha match

Nam gets an unexpected visitor during Doha match 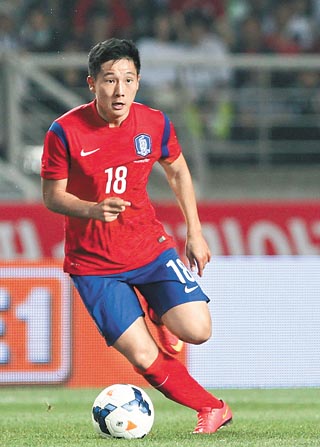 DOHA, Qatar - While Korea’s under-23 football team has been working their way to the Summer Olympic Games in Rio de Janeiro, there was another Korean footballer in the same city helping his team win.

Nam Tae-hee last Thursday played in the Sheikh Jassim Cup final at the Hamad bin Khalifa Stadium and helped his club Lekwhiya beat Al Sadd 4-1. It was the first time Lekwhiya had won the event, in which the league champions and the winners of the Emir of Qatar Cup clash.

Nam, who joined the Qatar Stars League champions Lekwhiya in 2012, scored the team’s third goal in the 61st minute by converting the penalty.

The 24-year-old attacking midfielder has played 28 matches for the Korean national team, with three goals.

At the game, Nam said he was surprised to see a special guest in the stands: Korea’s senior football team coach Uli Stielike.

“I didn’t hear anything about him [Stielike] coming to the match,” Nam said in an interview with Ilgan Sports, an affiliate of the Korea JoongAng Daily. “However, as I was going to the lockers after the first half, I saw him in the stands and was really surprised. I think we won the cup because he was in the stadium.”

But Nam wasn’t satisfied with his performance. He had hoped to be more impressive in front of Stielike, who will be planning Korea’s road to the final round of the Asian qualifiers for the 2018 FIFA World Cup.

“I had to two decisive chances to score, but I failed,” he said. “I should have focused more, but overall, our team played well against Al Saad.”

Nam, who moved to Qatar after playing with French club Valenciennes, was expecting a Korean derby in the cup final as defender Lee Jung-soo was on the Al Saad’s reserve list. However, the 36-year-old never made the pitch, as he turned out be recovering from a calf injury.

As a member of Korea’s bronze-medal winning team in the 2012 London Games, Nam apologized for not being able to attend Korea’s qualifier matches.

“Team training overlapped with the time of the games, but I really wanted to go there to support them,” he said. “I’m sure they will show better performances. They can win this tournament.”