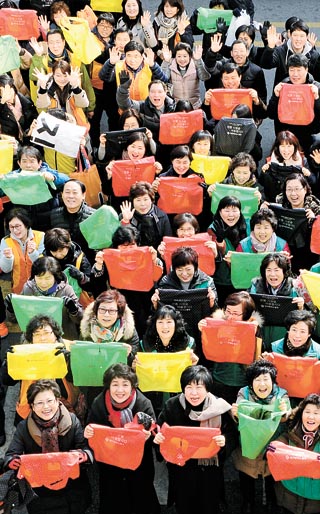 Public servants from Jung District government, including head Yun Sun-yeong, third from right in the front row, as well as members of civic groups display eco-friendly shopping bags in front of Seomun traditional market on Wednesday. The event was held to encourage shoppers to visit traditional markets as they prepare for the upcoming Lunar New Year holiday, which is just around the corner. The government has been increasing their supports to help reroute shoppers towards the spots, with the police allowing free parking in the areas surrounding 521 traditional markets for two weeks, through Feb. 10. [NEWSIS]