Call for sanctions on Pyongyang gets pushback

Call for sanctions on Pyongyang gets pushback 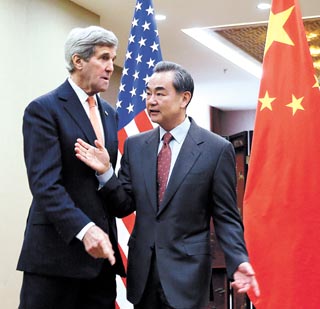 There appears to be a widening schism over punishing Pyongyang for its fourth nuclear test with Japan, the United States and South Korea on one side and China and Russia on the other.

Lavrov, during a New Year’s press conference, said that South Korea’s proposal of “six minus one” talks, excluding Pyongayng, was “not a good idea.” Five-party talks without North Korea, he pointed out, will “signify that someone is being isolated.”

He said that such a method was used to pressure Iran to denuclearize and that “there were no successful results.”

“Rather, Iran further developed its nuclear program,” he continued. “We cannot repeat the same mistakes in regard to North Korea.”

The minister said the “only way is to resume the six-party talks.”

The notion of a five-party meeting was immediately welcomed by Washington but snubbed by Beijing, which likewise emphasized the need to resume six-party talks, which involves North and South Korea, the United States, China, Russia and Japan.

The six-party talks, initiated in 2003 with the aim of convincing Pyongyang to abandon its nuclear ambitions, have been suspended since late 2008, when North Korea walked away.

South Korean Foreign Minister Yun Byung-se - who has yet to make a Moscow trip since he assumed his post - said that he is considering visiting Russia as early as possible in a local media interview earlier this week.

Seoul has been focused on penalizing North Korea for its fourth nuclear test on Jan. 6 with unprecedentedly harsh sanctions, saying that Pyongyang needs to pay a corresponding price.

According to South Korean foreign affairs officials, a stronger than ever resolution is in the works in the United Nations Security Council with the cooperation of the United States.

Korea is not a member of the 15-member council, but Shin Dong-ik, South Korea’s deputy foreign minister for multilateral and global affairs, flew to New York last week to speak with member states on the resolution.

However, consensus is needed from China and Russia, who wield veto power in the council.

“The process can take some time before there is momentum,” said a foreign affairs official on the UN Security Council resolution on North Korea. “However, we are looking for substance rather than speed.”

U.S. Secretary of State John Kerry was in Beijing Wednesday to pressure China, North Korea’s main economic patron, to rein in more the isolationist regime. He was scheduled to meet with President Xi Jinping and Foreign Minister Wang Yi.

But Wang said that while China agreed on the need for a new resolution, it should “not provoke new tension in the situation.” He added, “Sanctions are not an end in themselves,” indicating Beijing and Washington do not see eye-to-eye on how strong the sanctions will be.

She said that Washington “should work with China to bring the Korean nuclear issue back on the right track, instead of pointing fingers and making inappropriate remarks.”

She added that the United States “cannot solely rely on China to realize denuclearization on the Korean Peninsula” and reminded that all parties “have to work toward the same direction.”

Without naming the United States specifically, she said, “Some parties’ failure to do so is one major reason why the denuclearization process on the peninsula has ran into difficulties and the six-party talks are on a temporary hold.”

The Japanese government is mulling further unilateral sanctions on North Korea, reported the Sankei Shimbun on Wednesday, including expanding the scope of individuals or institutes it will freeze financial assets of.

This could enable a resumption of sanctions on North Korea that Japan lifted in July 2014 after the two countries agreed to cooperate on an investigation into Japanese abductees, which included restrictions on the amount of money that can be sent or brought to the North without notifying Japanese authorities.