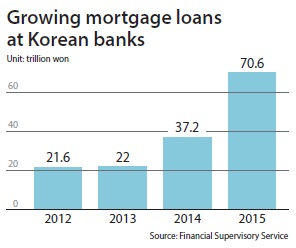 The volume of Korean mortgage loans increased at a record-high pace last year, spiking 17.4 percent year on year or 70.6 trillion won to hit 476.6 trillion won ($394.1 billion), according to the Financial Supervisory Service (FSS) on Thursday.

The rise was double that seen in 2014, when mortgage loans climbed 7 percent or 37.2 trillion won year on year.

According to data compiled by local banks and submitted to the FSS as of the end of 2015, the outstanding household debt balance, which includes mortgage loans, stood at 638.6 trillion won, up 14 percent or 78.6 trillion won compared to a year earlier.

Overall household debt steadily increased in 2015, as renters on the jeonse (lump-sum deposit rental) system borrowed to buy property, taking advantage of the nation’s record-low base rate and government policies easing the debt limit, which continued to invigorate the housing market.

The delinquency rates for mortgage loans, including cases where a borrower can’t pay back the principal for a month or more, dropped to a record-low 0.27 percent, largely thanks to the low interest rates.

As of the year’s end, the overall delinquency rate of loans issued in Korean won was 0.58 percent, also a record low, as banks started collecting on overdue debt from both households and companies last year to prepare for potential debt risks.

“The overall delinquency rate reduced, but that of large conglomerates rose,” said the FSS official. “The FSS will closely monitor any potential risk factors from corporate borrowers in vulnerable manufacture industries and also on regular households.”

To encourage repayment, the Financial Services Commission will launch a service in April in which banks call up their household borrowers two months before a debt’s deadline, the regulator also announced on Thursday. If necessary, the bank will offer to extend deadlines for borrowers with good credit, or introduce lower-credit holders to other assistance programs.