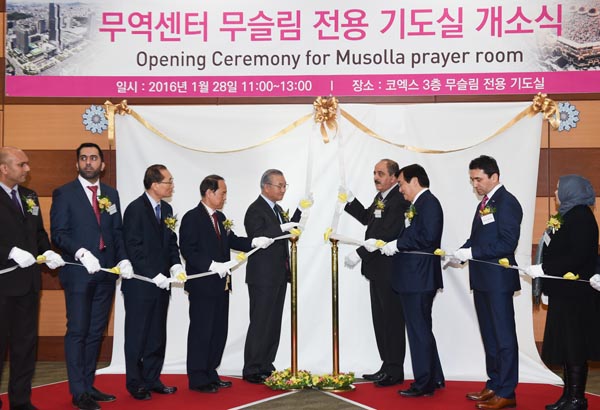 Korea International Trade Association Chairman Kim In-ho, fifth from left, Tunisian Ambassador Mohamed Ali, fourth from right, and other dignitaries cut the tape at a ceremony to celebrate the opening of a prayer room exclusively for Muslims on Thursday at COEX in Samseong-dong, southern Seoul. [KOREA INTERNATIONAL TRADE ASSOCIATION]

The Korea International Trade Association (KITA) opened a prayer room for Muslims on Thursday at COEX in Samseong-dong, southern Seoul, to cater to the increasing number of Muslims visiting and residing in the city.

The room, on the third floor of COEX, is open from 3 a.m. to 10 p.m. to cater to Muslims who pray five times a day at set times. The room is also partitioned to give separate spaces for men and women, as men typically occupy the front area of the room while women stay in the back.

Equipped with prayer rugs, Korans and a compass indicating the direction of Mecca, the room allows visitors to enjoy the convention center without worry.

“We expect the prayer room to provide convenience to customers and tourists who visit the convention center, and become a milestone for further cooperation in diverse sectors including trade and tourism [with the Muslim population,]” KITA Chairman Kim In-ho said.

Muslims currently comprise 25 percent of the world’s total population and account for a rising number of visitors to Korea. The number of Muslim visitors increased 19.7 percent year on year in 2015 from 752,000 to 900,000, according to data compiled by the Ministry of Culture, Sports and Tourism.

In response, both the trade association and tourism-related organizations like the Tourism Ministry and Korea Tourism Organization (KTO) are coming up with plans to cater to the needs of the new consumer base.

The KTO also operates a prayer room at its Seoul office in Jung District, central Seoul.

In June last year, the Tourism Ministry and KTO jointly held a seminar on how to make Korea more friendly for Muslim tourists, inviting foreign experts to speak on the needs of Muslim travelers. The steps are part of “Muslim Friendly Korea,” a project under the Tourism Ministry that includes establishing a classification system for halal restaurants and creating documentaries on the importance of creating businesses catering to Muslims.

Halal refers to foods Muslims are permitted to eat under Islamic law, and it is also a big business, accounting for 17.7 percent of the global food and beverage market.

After President Park Geun-hye’s Middle East tour last year, domestic interest in the region, its culture and religion has continued to grow, and businesses have begun to take note of the possibilities in the halal market.

The Ministry of Agriculture, Food and Rural Affairs signed a memorandum of understanding with the United Arab Emirates in March last year to strengthen collaboration in the halal food industry. The ministry aims to increase its export of halal food to approximately $1.5 billion by 2017.

Companies interested in entering the halal food industry must first obtain certification from designated institutions. Currently in Korea, the Korea Muslim Federation is the only group authorized to certify halal food producers.