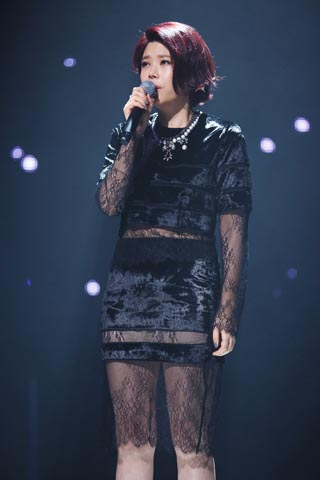 Celebrities do not put up with malicious comments anymore. A slew of celebrities sued Internet users who left nasty comments about them on Tuesday.

Ballad singer Lyn (pictured) uploaded a post to her blog on Monday saying, “I have sued many Internet users from last fall. I’m not denying some mistakes my husband made, but I needed some legal protection from groundless rumors, insults which crossed the line, and swear words targeting my parents and a child of ours that does not even exist.”

Lyn married singer Isu, a member of the K-pop trio M.C the Max, in September 2014. The two do not have any children.

Isu reportedly paid for sex from a minor in 2009 when he was working in public service as an alternative to mandatory military service. He was investigated by the prosecutor’s office, but the indictment was dropped.

“I receive requests [from malicious commenters] for leniency, but I wouldn’t sue them in the first place if I was lenient,” the post continued. “You would understand my pain as a woman if you have read the comments.”

The singer said she sued malicious commenters with the consent of her husband and his music agency.

Namoo Actors, the 26-year-old actress’s agency, said on Tuesday that “we weren’t sure whether it was right or wrong to sue Internet users but decided to bring the case to the police in hopes of eradicating malicious comments.”

Cho In-ho, a lawyer representing Park, said, “Some of them have been tormenting Park with lewd language for a long period of time, and the actor began to receive more nasty comments as he recently began the drama series ‘Neighborhood Hero.’”

Park was sued for rape by a woman he knows in 2013. The woman later withdrew the charge, but the actor has often been the target of malicious comments since then.
By Sung So-young