2015 was the year of shrinking tablet market

2015 was the year of shrinking tablet market 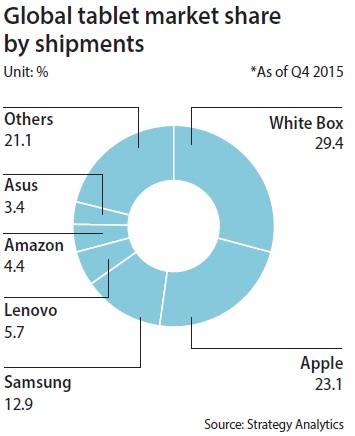 The global tablet market saw its worst year-on-year growth in 2015 since market leader Apple debuted its first iPad in 2010, according to market researcher Strategy Analytics on Tuesday.

Tablet shipments in 2015 shrank 8 percent from a year earlier to 224.3 million units, and shipments in the last three months tumbled 11 percent year on year to 69.9 million.

“Apple suffered big setbacks this year, as a lack of innovation during the last several years caught up to iPad sales,” said Peter King, research director at the tablet and touchscreen strategies service of Strategy Analytics. “Instead, Apple has focused on its MacBooks, iPhone 6, 6 Plus and Apple Watch releases.”

He noted that the ambitious launch of the 12.9-inch iPad Pro failed to meet expectations during the fourth quarter.

“While we see real long-term potential for the iPad Pro in the enterprise and verticals, there was not enough demand to move the needle,” he said.

Tablets with detachable keyboards, such as Microsoft’s Surface Pro, were the bright spot. Their sales spiked 379 percent year on year in 2015 as computing needs continue to trend more mobile. But that growth is “on top of a small base and cannot make a major directional difference for the wider tablet market yet,” Strategy Analytics said.

As of the fourth quarter, white box tablets - machines without a well-known brand name that mostly run on Android - took the top market share of 29.4 percent, followed by Apple at 23.1 percent and Samsung Electronics at 12.9 percent. Notably, Apple‘s market share in the last quarter slumped 25 percentage points from the same period a year earlier, and Samsung lost 17 percentage points over the same period.