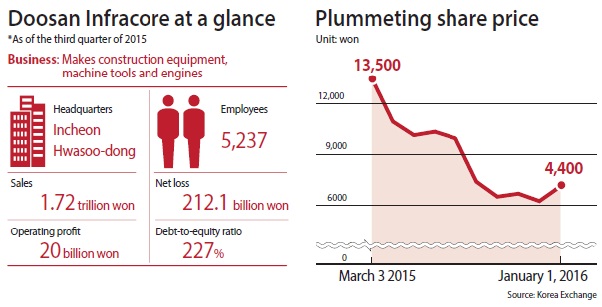 The unit was supposed to be sold to Standard Chartered Private Equity (SC PE) when MBK was listed as a secondary negotiating party on Dec. 23. SC PE offered 1.36 trillion won ($1.12 billion) for the unit last year and MBK offered 1.18 trillion won. But SC PE failed to come up with the purchase price.

As a result, Doosan Infracore chose to sell the unit to MBK. MBK, which has strong financial resources, is likely to complete the deal by May, industry analyts say.

Doosan Infracore will pay back debt with the proceeds of the sale. The manufacturer’s net debt was 5.28 trillion won as of the third quarter of last year. Annual interest on the debt amounts to 300 billion won.

Doosan Infracore plans to reduce its net debt below 4 trillion won and its annual interest payment to the 200 billion-level. The company expects its debt rate to be reduced from 280 percent of equity in the first half of last year to around 100 percent after the deal.

“We will be in much better shape after paying back some of the debt,” said a representative of Doosan Infracore.

Doosan Group is doing numerous things to improve its finances, such as selling Doosan Defense System & Technology (DST), a defense company, and its stake in Korea Aerospace Industries (KAI).

At a bidding held on January 15, there were six companies interested in buying Doosan DST. Industry insiders expect it will be sold for 500 billion to 800 billion won.

Regardless of the groups’ efforts to shore up its balance sheet, there are no signs of its stock price recovering.

Doosan Infracore’s share price dropped 43 percent from 7,120 won on Dec. 1 to 4,045 won on Monday. The group’s other companies such as Doosan Heavy Industries & Construction, Doosan Engineering & Construction and Doosan Engine all fell nearly 30 percent in the same period.

“Doosan Infracore only accounts for 16 percent for the group’s total market capitalization, but the company’s sales are nearly 40 percent of the group’s and its debt is 43 percent,” said Han Young-soo, a researcher at Samsung Securities. “The company has a huge impact on the group.”

Doosan Group bought 51 percent of the shares of the machinery manufacturer owned by Daewoo for 1.9 trillion won in 2005 and changed its name to Doosan Infracore.

The machine tool unit was hit hard by the slump in China’s construction market. The company recorded a net loss of 212.1 billion won in the third quarter of last year, and its debt-to-equity ratio rate was around 227 percent in the same period.