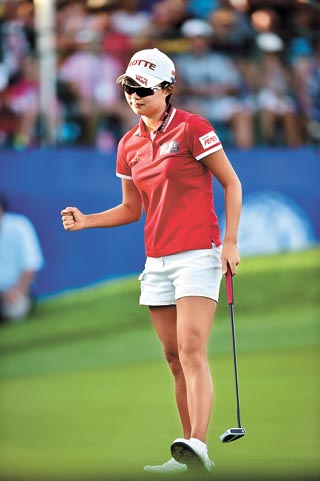 Kim Hyo-joo plans to channel her focus on the LPGA tour in the first half of this year to qualify for the Olympics in Rio. [JOONGANG]

Kim Hyo-joo plans to cut back on her hectic schedule and focus solely on the LPGA tour this year.

She took part in three different KLPGA tournaments while making her debut at the LPGA in 2015. However, the brutal schedule between the KLPGA and LPGA tournaments was too demanding for her. At one point during the first half of the year, she ended up in the hospital due to fatigue. Her physical condition deteriorated to the point that she had to forfeit several events in the second half.

But, Kim expects things to be different this year. She announced on Wednesday that she will opt out of all KLPGA tournaments during the first half of the year. She will focus her attention solely on the LPGA tours, at least until the Rio Olympics in August. She asked her main sponsor Lotte to understand her absence.

Her decision, however, causes a problem. Kim won the KLPGA Kumho Asia Open in July last year. The KLPGA has a strict regulation that if the winner of the previous year’s tournament doesn’t play in the following year’s event, they must pay a fine equivalent to the prize money they received.

Despite the heavy penalty, Kim still plans to forgo Kumho Asia Open this year. “There is a clause in the regulation that the winner of the previous year will not be fined for their absence if there is a legitimate and justifiable reason. We expect Kumho Asia, as Kim’s sub-sponsor, will understand as the Olympic Games are at stake here,” said Kim’s representative Kang Young-hwan.

Initially, Kim’s goal for the year was securing two LPGA titles before the Olympics. As the Korean Olympics golf squad is determined based on the world ranking, she thought two wins would be sufficient for her to obtain the necessary ranking. She started off well, as her ranking climbed up the ladder after her victory at the Pure Silk-Bahamas LPGA Classic on Sunday. After her win, she re-calibrated her goal up to three LPGA wins before the Olympics.

And, if she maintains her current form, she will achieve her goal. Her tee shots recorded 93 percent accuracy despite the winds in the Bahamas, winning the tour at 18-under 274. She credited her iron-like mentality and stable shots for her success.

Her record in her KLPGA debut in 2013 was rather poor. She was often criticized that she lacked the endurance necessary for the long run. Once she adapted to the tour schedule in 2014, she was able to perform much better.

Kim’s record as a LPGA rookie last year also failed to meet expectations. The LPGA is much more demanding physically than the KLPGA as the travelling distance is much greater. Kim was even under more pressure as she had to handle domestic and international schedules simultaneously. As a second-year LPGA pro, Kim now plans to channel her entire focus on LPGA events alone.

She will be playing in the second LPGA tour at Coates Golf Championship starting on Feb. 5th (Korean time).