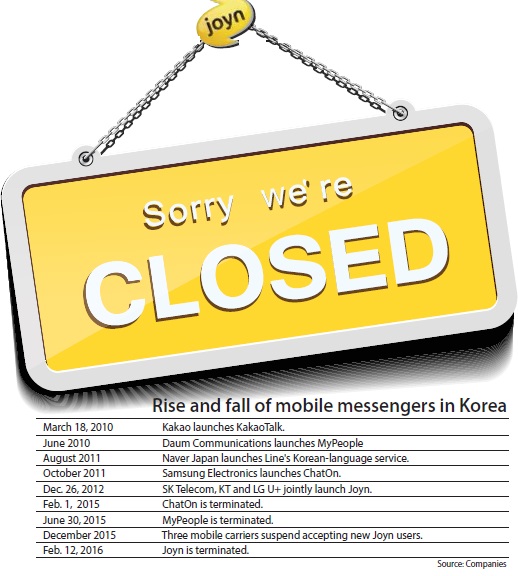 Joyn, a mobile messenger app jointly launched by Korea’s three mobile carriers in late 2012, is set to terminate service today after failing to catch up with top player KakaoTalk.

The move makes Joyn one of many homegrown mobile messengers to have come and gone since Kakao’s Kakaotalk debuted in March 2010. The only survivors in Korea are KakaoTalk and Line, operated by top portal site Naver’s Japanese subsidiary Line Corporation.

Joyn stopped accepting new users in December, signaling an end to the service.

SK Telecom, KT and LG U+ protested KakaoTalk for hogging their data networks by allowing users to send free text messages. They feared their revenue from SMS messages, which have now become free for most monthly plans, would be slashed. However, after seeing KakaoTalk attract 10 million users within a year, the carriers jumped into the mobile messenger market with Joyn. But it debuted too late, and lacked cutting-edge features capable of drawing users already accustomed to KakaoTalk.

When it debuted, the operators of Joyn boasted the service was different because it enabled users to exchange their location, as well as photos and videos, during calls. Those features were quickly added to both KakaoTalk and Line.

“It was inevitable that Joyn would fall behind from the beginning because it was launched after KakaoTalk was already way ahead,” said a spokesman with one of the three carriers.

Last year saw the collapse of two mobile messengers. Last February, Samsung Electronics shut down the ChatOn mobile messenger it ambitiously rolled out three years earlier. The termination, Samsung explained, was “to concentrate on platform-based services such as health and mobile commerce in the face of the rapidly changing market situation.”

Last June, Kakao pulled the plug on the five-year-old MyPeople mobile messenger, launched by Daum Communications (which later merged with Kakao) just three months after KakaoTalk debuted. MyPeople’s users peaked at 28 million in 2014 thanks to its inclusion of a free voice calling feature earlier than other apps, but KakaoTalk soon added the same option to and outpaced the service.

Foreign-made messenger apps like WeChat and WhatsApp never managed to gain a foothold in Korea.

The downfall of late-coming mobile messengers only further solidified KakaoTalk’s hold on the market. KakaoTalk’s active monthly users in Korea totaled 40.06 million as of the end of 2015, accounting for 96 percent of domestic mobile messenger market. When users outside of Korea are included, the number of active monthly users rises to 48.32 million, according to Kakao CFO Choi Sae-hoon in a conference call last week, during which the company released its fourth-quarter earnings results.

Naver’s Line, on the other hand, paid attention to overseas markets from the beginning. It had 200 million monthly active users worldwide at the end of 2015, up 2.6 million from a year before. The messenger is particularly dominant in Indonesia, Japan, Taiwan and Thailand, according to Naver CFO Hwang In-joon.

Industry insiders speculate Line Corporation will go public in the Japanese stock market in the first half of this year. Hwang refused to confirm this during the same conference call.