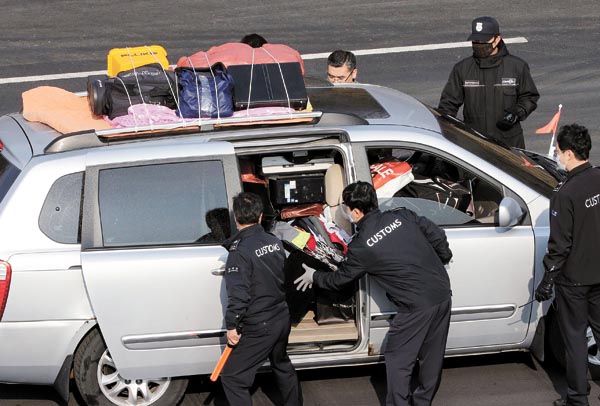 North Korea expelled all South Korean workers from the jointly run industrial complex in the North, froze assets and equipment left behind, and denounced South Korea’s shutdown of the industrial park as a “declaration of war.”

The North also declared the industrial park a military control zone, according to the Committee for the Peaceful Reunification of Korea, which handles inter-Korean affairs, in a statement reported by the state-run Korean Central News Agency (KCNA) on Thursday afternoon.

“Unpardonable is the puppet group’s act of totally suspending the operation in the [Kaesong complex], finding fault with the DPRK’s H-bomb test and launch of a satellite,” the committee said in a statement. It said all South Koreans had to leave by 5 p.m. Pyongyang time yesterday.

DPRK is short for the Democratic People’s Republic of Korea, the official name of North Korea.

Pyongyang also cut a military hotline and a separate communication link with South Korea located at Panmunjom, the heavily fortified truce village between the two Koreas.

“The recent provocative measure is a declaration of an end to the last lifeline of North-South relations, a total denial of the June 15 [2000] North-South Joint Declaration and a dangerous declaration of war, driving the situation on the Korean Peninsula to the brink of a war,” the committee said.

It lashed out at President Park Geun-hye, saying that “South Korea will experience what disastrous and painful consequences will be entailed by its action.”

The North’s retaliation came a day after Seoul shut down the industrial complex to punish the North for its fourth nuclear test on Jan. 6 and the launch of a long-range ballistic missile Sunday morning.

According to an official from the South’s Ministry of Unification, a total of 248 South Koreans - workers from 124 companies and officials of the management committee of the complex - were in the park as of Thursday afternoon.

“The government will exert all-out efforts to bring our people home,” the Ministry of Unification said after the North Korean statement.

South Korea beefed up its military readiness in order to respond to possible provocations by the North overnight, an official at the Ministry of National Defense said. He added that increased activity by the North Korean military had been spotted at the Kaesong complex on Thursday.

South Korea was already pulling out its people and goods from the complex in the North on Thursday morning, when North Korean workers failed to show up for work.

On Thursday morning, 290 commuter buses run by the industrial park, which normally bring the 52,000 North Korean employees to work, arrived empty, according to an official at the Ministry of Unification.

“The process of entering and exiting the complex went smoothly in the morning under the approval of both countries,” the official said.

“The government has put priority on two things: to bring our people home safely and to minimize damages to companies.”

The government official said it will complete bringing South Koreans at the complex home Thursday. The people who were remaining in the complex hastily escaped from the North after they were ordered by North Korea to leave immediately around 5 p.m., leaving behind most of their assets.

This was the first unilateral closing of the industrial park by the South Korean government, which concluded that the cash paid to the North in workers’ wages and investment was misused for the development of nuclear weapons and missiles.

Unification Minister Hong Yong-pyo said Wednesday that South Korea cannot stop North Korea’s nuclear and missile programs with its existing methods of response. He said the closure of the Kaesong park would stop about $100 million a year from flowing into the North from the South. In 2015, $120 million in cash was sent to North Korea, and a total of $560 million in cash has been sent so far through Kaesong.

South Korea also plans to cut off power and water to the factory zone.

Another government official declined to disclose the government’s contingency plans as of Thursday afternoon if Pyongyang detained South Korean nationals or blocked them from removing goods or assets from their factories.

The Kaesong complex, which started operation in 2004, is the last of all inter-Korean economic cooperation projects that started during the so-called "Sunshine Policy" era of engaging with North Korea between 1998 and 2008.

All other projects, such as the Mount Kumgang tour program, have been suspended since 2010, when Seoul imposed economic sanctions to punish Pyongyang for its torpedoing of the Cheonan warship, which left 46 sailors dead. Under the so-called May 24 sanctions, all inter-Korean economic activities except Kaesong have grounded to a halt. Pyongyang denies torpedoing the Cheonan ship. The North also seized South Korea’s assets in Kumgang resort area in 2010.