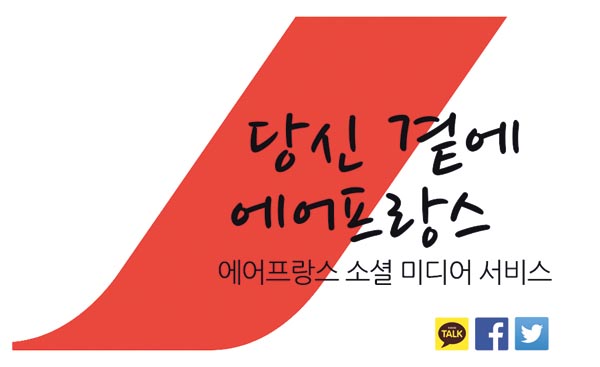 Earlier this month, Air France opened an account on the nation’s most popular mobile messenger app, KakaoTalk, to expand its customer service capabilities.

Through the platform, Air France’s social media team will provide immediate responses in Korean to flight inquiries, reservation changes and cancellations. This one-on-one service will be open from 9 a.m. to 6 p.m. on weekdays and 9 a.m. to 5:30 p.m. on weekends.

Clients who wish to communicate in English or French are recommended to post questions on the company’s Facebook page (www.facebook.com/AirFrance) or Twitter account (@airfranceKR), which are both run 24 hours a day, 365 days a year.

Air France also operates a page on Kakao Story, through which visitors can look into the company’s latest information such as flight discounts and schedules, events and in-flight service changes.

On board, Air France has prepared various services for customers who use the Incheon-Paris route. This particular line serves Korean dishes from soups to desserts as part of its in-flight menu. As an international airline, Air France places an interpreter on every Korea-France flight to provide language support for English- and French-speaking passengers.

As for Korean passengers who land in or depart from Paris Charles de Gaulle Airport, the company’s Korean employees will be at departure and arrival gates to help with flight transfers, luggage and transportation.