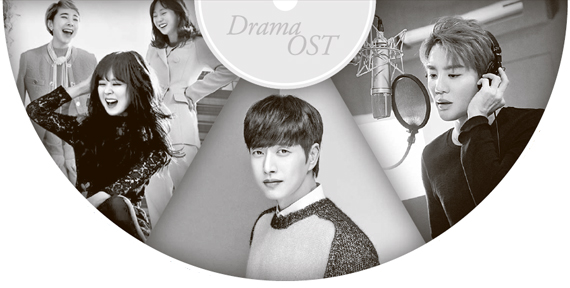 From left: a still from the drama “One More Happy Ending” on MBC; “Cheese in the Trap” starring Park Hae-jin on tvN; and singer Kim Jun-su, who sang one of the original soundtrack songs for “Six Flying Dragons” on SBS. [MBC, tvn, C-JES ENTERTAINMENT]

In the fast-changing music scene, songs tend to disappear from the charts within days of release. Even top-ranked songs are subject to this same fate.

But Lee Juck’s song “Don’t Worry” from the soundtrack of hit drama series “Reply 1988” lost its No. 2 spot on the chart of music streaming service Genie Music only recently, after being released in November. This impressive feat is turning heads in the music industry, and it underlines the importance of original soundtracks.

In place of hard-copy albums, the Korean music industry has shifted to online streaming. Instead of releasing a bunch of songs at once, artists now release tracks one by one with significant intervals in-between.

For example, K-pop boy group Big Bang released one single per month between May and August of last year, and the five-member act dominated the music streaming market for months.

Now, the makers of drama soundtracks are applying this technique to their own businesses.

According to Genie Music, last year about 90 drama series released their original soundtrack songs one at a time instead of all at once.

The ongoing 50-episode series “Six Flying Dragons” on SBS has released six tracks so far over the course of 39 episodes.

And smash hit “Reply 1988” released 11 tracks throughout the duration of the series from November to January.

Typically, programs first play the songs during major scenes, and then the artists and their agencies send out press releases to promote the songs.

CJ E&M, a leading entertainment company which owns several TV channels including tvN, said that young listeners tend to stream songs, making it more attractive to release songs one by one.

Another trend in original soundtracks songs is seeking out rare and unique voices, because with many drama series being produced each year it is difficult to nab the most popular singers.

For this reason, producers are actively looking for relatively less renowned singers, or indie musicians, to perform songs.

In the case of “Cheese in the Trap,” tvN went as far as to assign all songs to indie musicians.

Lee Joon-sang, the head of Chili Music, which produces soundtracks, said, “Singer Kim Na-young’s recent digital single ranked higher on popular music charts because she has been building up her own career by singing many original soundtrack songs.”

Kim released the digital single “What if it Was Going” in December and the song topped several major online charts upon release, quite a feat for a lesser-known singer.

Contributing to original soundtracks “is considered an opportunity for indie musicians to vindicate their musical prowess,” Lee added.

Lee’s company is in charge of producing the original soundtrack for the drama series “One More Happy Ending” on MBC.

CJ E&M even created a five-member team solely dedicated to producing drama original soundtracks. They listen to and analyze songs to identify which dramas they fit best with.

All the songs from the “Reply” series were the work of this team. The team strived to remix old songs with trendy tunes and elements of nostalgia at the same time. Then they released the songs one by one in an order that best fit with the themes of the drama.

“We were not allowed to read the scripts of ‘Reply 1988’ because of security issues. So we had to work on songs based on instructions given by the producers,” said Ma Ju-hee, the head of the team at CJ E&M.