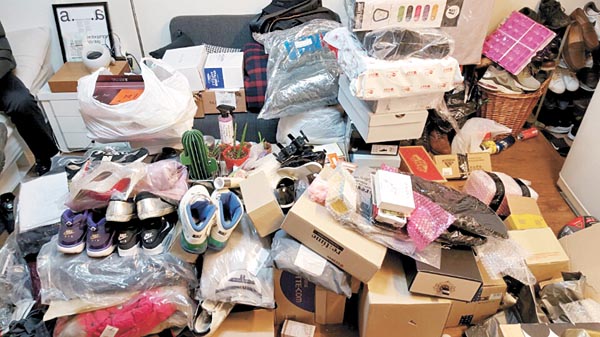 A man alleged to have been stealing delivery packages over the past year, since last year’s Lunar New Year holiday, was caught in the act on Feb. 4 as he attempted to make away with another box in Yeoksam-dong, southern Seoul.

The suspect is thought to have stolen some 1,000 packages worth about 100 million won ($84,000) from the front steps and doorstops of multiple houses and residential complexes in the Gangnam and Songpa Districts of southern Seoul and in Seongnam, Gyeonggi.

The 33-year-old man, surnamed Kim, is a graduate of Seoul National University who worked in a landscape architecture research center for two years before quitting in 2014.

In his struggle to earn a living, he said, he started stealing delivery packages. He told police that he estimated the price of the goods by reading the receipts on the box and then reselling the products online.

Authorities found about 500 different kinds of stolen goods in Kim’s home in Songpa District that ranged from fruit gift sets for Lunar New Year to televisions and rice cookers.

Korea is well known for its quick delivery services. According to the Korea Integrated Logistics Association, the value of last year’s delivery service market stood at 4.34 trillion won, with a total of 1.82 billion boxes delivered. Market value grew about seven times that in 2000, when it amounted to 600 billion won. Koreans older than 15-years-old in the economically active population receive about 68 deliveries annually.

But with that increase has come more theft. According to the Korea Consumer Agency, the number of customer service requests spiked from 9,900 in 2010 to 14,000 in 2014; half were complaints regarding lost packages.

“Of the 30 or so customers who file claims for lost packages in a month, most request their packages be left at the door,” said an official from a delivery service company.

Kim Joon-park, a 29-year-old businessman, admitted telling the delivery man to leave his package at the door on Jan. 28, as he watched CCTV footage of another man fleeing with his package outside the entrance of his multiplex in Hyehwa-dong, central Seoul.

Still, the presence of security guards doesn’t always guarantee the package will make it safely to its intended recipient. Last month, a 43-year-old woman surnamed Lee sneaked into the security office of an apartment complex in Geumho-dong, Gwangju, and stole a package with the guard on patrol.

“People constantly come in and out of the security office to pick up their packages throughout the day. It is difficult to confirm each time whether the person is the right owner,” said Joo Han-suk, a security guard in Bomun-dong, northern Seoul.

But the storage system there can be haphazard, and cashiers are often not required to check the identity of customers picking up packages.

Park Yeon-mi, 24, a resident of Daebang-dong, southern Seoul, was told by a store worker on Feb. 3 that “her brother had picked up her package for her” when she went to pick up the pajamas she ordered online. But the CCTV footage showed a man, who had no relation with her, taking the package. He wore a baseball cap, making his face indiscernible.

As complaints regarding stolen packages have increased, local governments have begun to establish public institutions for safe and effective delivery service.

In Firefly Centers set up throughout Seocho District, southern Seoul, delivery men store goods in lockable storage cabinets and send a text message to the customer that contains a password to open the locker.

In 2012, CJ Korea Express established its Silver Delivery service, wherein retirees and the elderly are hired to receive and deliver packages to customers at their convenience.

“The current cost of delivery services, ranging from 2,000 to 3,000 won, cannot cover services to prevent losses,” said Jeong Ji-yeon, secretary general of the Consumers Union of Korea. “There is an increasing need to change the delivery system itself to ensure customers can receive goods safely at the hour they want, even if it means they have to pay more.”