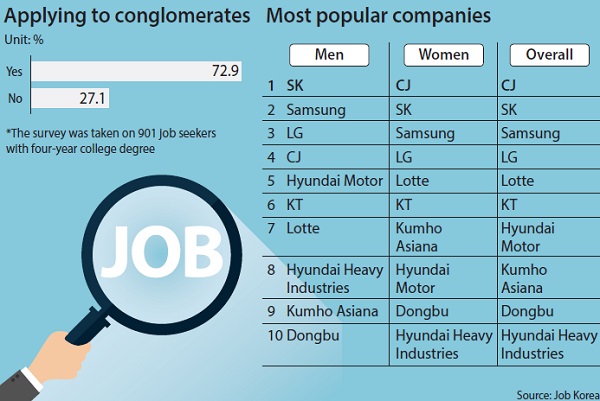 What’s the most popular conglomerate among young job seekers?

Samsung or Hyundai Motor Group would have been a good guess, but it turns out that young people selected CJ Group, which has successfully transformed from a food manufacturer into a multimedia content developer.

According to a joint survey by Job Korea and the YBM Korea TOEIC Committee involving some 901 job seekers who graduated from four-year colleges, 72.9 percent said they would apply to one or more of the nation’s 10 largest conglomerate groups during the spring hiring season, while the remaining 27.1 percent said they would not, as conglomerates usually hire a smaller numbers of newbies in the first half of the year and tend to hire more in the fall.

Among the 651 respondents who said yes, 57.1 percent chose CJ Group as their interest target, followed by SK with 47.9 percent.

“It is true that Samsung and Hyundai Motor Group have been the long-time top picks for job seekers, but CJ emerged as a hot workplace thanks to a well-established corporate image as a media and entertainment content developer,” said Hyun Young-eun, a representative from Job Korea.

By gender, nearly 55 percent of female respondents favored CJ Group, while their interest in other groups like SK, Samsung and LG were a lot lower in the 30 percent range.

Seventy-six percent of male respondents named SK Group as the top pick, but they at the same time showed strong interest in the other four conglomerates.

The nation’s top 10 conglomerates have started rolling out the year’s hiring plan. Many are expected to hire similar numbers of college graduates as last year despite sluggish economic conditions and many of the groups seeing affiliates’ performance worsening quarter by quarter.