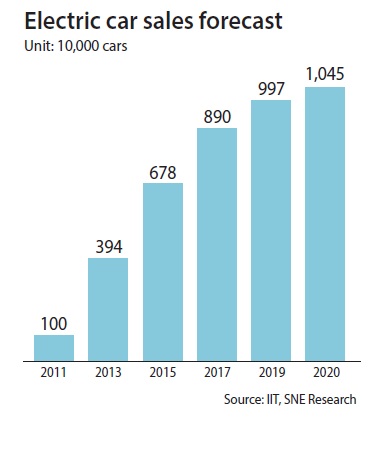 SK Innovation inked a deal with Mercedes-Benz to supply it with lithium-ion battery cells, according to the company on Wednesday.

The move is a major step forward for the company, which is trying to catch up with current top players LG Chem and Samsung SDI.

“We cannot disclose exact quantities or numbers regarding the contract, but it is a large-scale project covering batteries not only for a single electric car model but for various models by the carmaker,” the company said.

In an effort to strengthen its electric car battery business, SK Innovation doubled the capacity of its existing battery manufacturing facility in Seosan, South Chungcheong, last year and is operating the factory seven days a week, 24 hours a day. With the added orders from the recent contract, the company plans to add more production lines to the facility.

“We have established a global marketing network with automakers in Korea, China and Europe by winning a major project with Mercedes-Benz,” said Lee Hang-soo, a spokesman for SK Innovation. “While reinforcing our relationship with current partners such as Hyundai Motor, Kia Motors and Daimler, we will strengthen our position in the global battery market.”

But SK is not the only one making strides in the industry. Korea’s top four conglomerates - Samsung, Hyundai, SK and LG - are all competing for ground. The companies are leveraging their affiliates to develop new, differentiated technologies, as Hyundai Motor Group is doing with parts maker Hyundai Mobis.

The tough competition is largely due to the growth potential of the market. As environmental regulations for vehicles are becoming stricter, particularly in Europe, China and the United States, the global demand for electric cars is predicted to increase substantially.

To solidify its hold on the market, LG Chem opened up a new factory in Nanjing, China, capable of producing 50,000 batteries a year in October last year.

Samsung SDI recently shed its chemicals business to focus more on the car battery sector, opening a factory in Xi’an, China, last October capable of producing 40,000 batteries a year. The company said last month at its performance announcement that it plans to invest roughly 3 trillion won by 2020 solely in the electric car battery business and is reviewing plans to build another manufacturing plant around Europe to capture the global market.

SK Innovation, a relative latecomer to the battery business, began developing its batteries from 2005 and first supplied its products for the hybrid Mitsubishi Fuso in 2009.