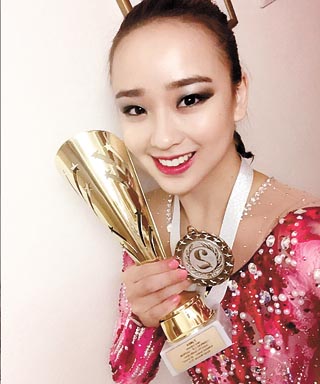 Son was the only non-Russian gymnast to stand on the podium. The gold and bronze went to two Russian gymnasts, Aleksandra Soldatova with 74.066 points and Arina Averina with 72.682 points.

The silver on Sunday in Moscow is Son’s first medal in an individual all-around competition. She has competed in the event every year since 2011, excluding 2015.

Son finished the Grand Prix in 19th place the first year she competed. Since then, she’s been climbing up the ladder to finish sixth place in 2014 and finally second in 2016.

In addition to her silver, Son added three more medals to her shelf in apparatus. Son grabbed a silver in hoop and two bronze medals from ball and ribbon.

Meanwhile, her scores for ball and ribbon were 18.383 points and 18.133 points. Gold and silver from these
two events all went to gymnasts from Russia.

Having placed 5th in the individual all-around event at the 2012 London Olympics, Son is determined to develop her success in Moscow to progress to the upcoming Olympics and bring home a medal.