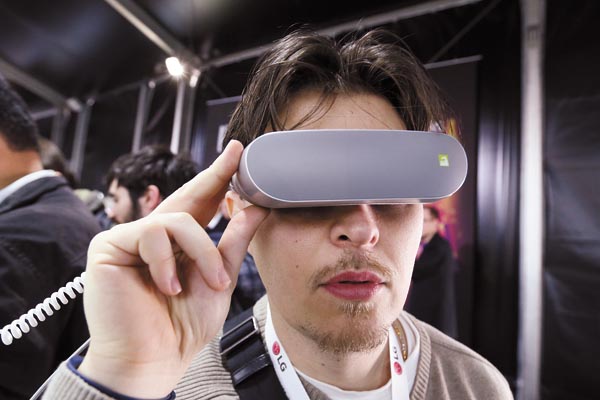 An attendee tries the LG 360 VR headset from LG Electronics at a news conference ahead of the Mobile World Congress in Barcelona, Spain, on Sunday. [BLOOMBERG]

BARCELONA, Spain - LG Electronics unveiled its new flagship G5 smartphone on the sidelines of the Mobile World Congress (MWC) on Sunday, betting on a bold new feature that allows users to customize their device with eight different components, or modules.

The world’s sixth-largest smartphone maker also jumped into the virtual reality game, introducing its first VR headset, which is also an add-on for the G5.

At the launch event under the slogan “Life’s good when you play more,” LG called the next-generation phone a “theme park in your pocket.” Users can pull off the “basic module” plugged into the slot on the bottom of the device, like a drawer, to connect other hardware add-ons and accessories for additional functions that LG has collectively dubbed module “friends.”

“We intend to create LG smartphones’ own fandom [with the G5] by maximizing the pleasure that a smartphone screen can offer,” said Cho Joon-ho, president of mobile communications at LG Electronics, who led the event on stage. “Smartphones are way too powerful a device just for taking pictures and using social media.” 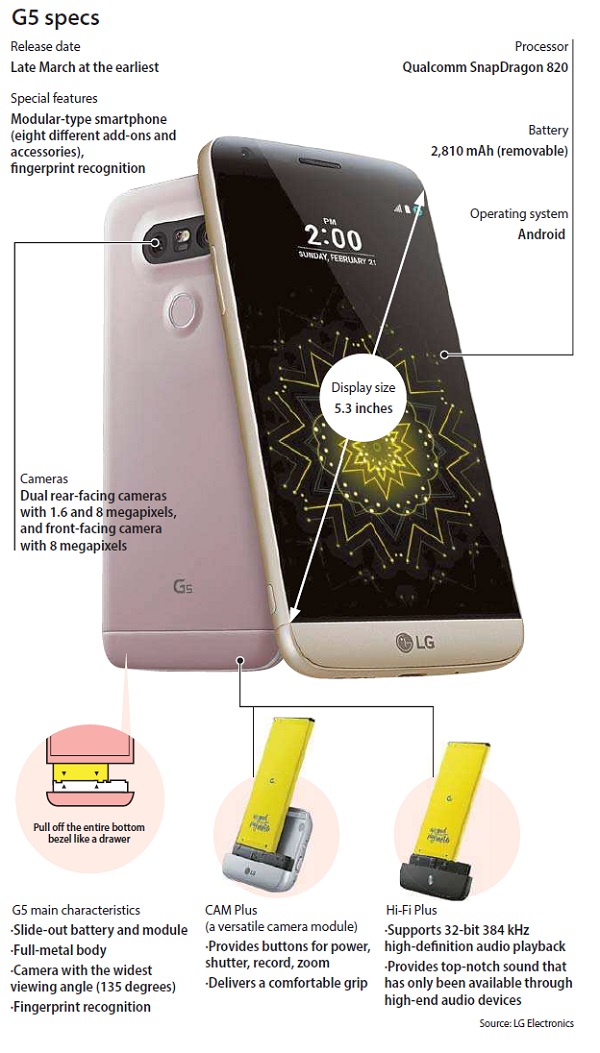 LG’s modular-type phone comes 13 months after Google showed off a prototype for a modular phone as part of its Project Ara initiative, and LG claims the G5 is the world’s first modular-type smartphone.

Among the eight proprietary modules for the 5.3-inch phone are the LG CAM Plus and LG Hi-Fi Plus with B&O PLAY. The former is equipped with various functions that can turn the camera on and off, launch the shutter, and zoom in and out, instantly turning the phone into a high-end DSLR camera-like device.

The latter module, in partnership with the Danish luxury audio producer Bang and Olufsen, serves as a portable digital to analog converter. When the module is connected, the smartphone offers premium-quality sound that ordinary phones are not able to provide. The smartphone effectively becomes a portable Hi-Fi audio player. Cho vowed to release additional modules over time.

Notably, LG debuted its first virtual reality headset, called the LG 360 VR, as one of the modular add-ons. The biggest advantage of the VR device is its light weight; at 118 grams (4 ounces), it is one-third that of ordinary VR glasses, with a stylish design and foldable feature, LG said.

The LG Smart Controller, another accessory for the G5, allows users to control certain drones with ease by viewing the real-time video stream of a drone on the phone.

The G5 also boasts a sleek, streamlined, full-metal body, following in the footsteps of Samsung and Apple, as well as a removable battery. Its rear-facing camera is equipped with a 135-degree viewing angle.

The G5, a follow-up to the G4 which rolled out in April last year, will be released around late March at the earliest, an LG spokesman said. LG has yet to disclose the prices.

The showcase took place at the Sant Jordi Club, an indoor sports arena about 5 kilometers (3 miles) from the MWC’s main venue, a day before the 2016 edition of the Mobile World Congress kicked off and five hours before Samsung Electronics’ Mobile Unpacked global press event for the Galaxy S7. This is the first time LG has ever unveiled a new smartphone at the annual show.

In between the onstage presentation, LG inserted sitcom-like segments featuring actors to better illustrate the new functions in a playful fashion. Executives from partner companies such as Qualcomm, Google, Parrot and B&O made brief appearances on stage to give additional explanations.

After slumping to the world’s No. 6 smartphone producer last year, overtaken by China’s Huawei, Xiaomi and even Lenovo, LG has been under severe pressure to resuscitate its smartphone business.

Throwing the launch event on the sidelines of the MWC and opting to shift its marketing point from technologies to “fun factors” are seen as part of the company’s desperate efforts to rebound.