Left:Delegates use the Gear VR (virtual reality) headset, manufactured by Samsung Electronics, at the Samsung Electronics Unpacked event ahead of the Mobile World Congress in Barcelona, Spain, on Sunday. Samsung’s 360 camera is placed on a tripod. [BLOOMBERG] Right: The camera has a 128 GB microSD slot. It captures 30 megapixel images with 3840x1920 resolution. [SAMSUNG ELECTRONICS]

BARCELONA, Spain - It was a sight to behold. Samsung Electronics had the entire audience of 5,000 press members and industry insiders wearing its Gear VR (Virtual Reality) headsets to demonstrate its latest smartphones, the Galaxy S7 and S7 edge, on Sunday.

And when they removed their headsets there, on stage, was Facebook CEO Mark Zuckerberg who made a surprise, unannounced appearance to boost Samsung’s Gear VR device.

VR has evolved from a mere object of curiosity in the past few years to a new category of consumer product that many in the industry consider as “the next big thing.” Zuckerberg said virtual reality is the next platform that makes everyone experience and share anything they want. “VR is going to be the most social platform,” he said.

Left:LG Electronics’ Rolling Bot is demonstrated after the Korean smartphone manufacturer unveiled its latest smartphone G5. The Rolling Bot is a home monitor that can be remotely controlled with a smartphone. It also interacts with other smart-home devices through Wi-Fi and Bluetooth.[BLOOMBERG] Right: LG also introduced its 360 CAM. It has a microSD card slot but can also internally store images of up to 4 GB. [BLOOMBERG]

He also said that Facebook has dedicated “hundreds of our best engineers” to VR, indicating the extent the social media giant has already embraced virtual reality.

This also shows what Facebook wants to do with Oculus, a VR developer the company acquired two years ago for $2 billion. Samsung partnered with Oculus to launch Gear VR.

Although the VR device is not new, the company’s decision to launch its two latest smartphones using the device suggests Samsung’s focus now lies in the experience its devices offer, not just the hardware. 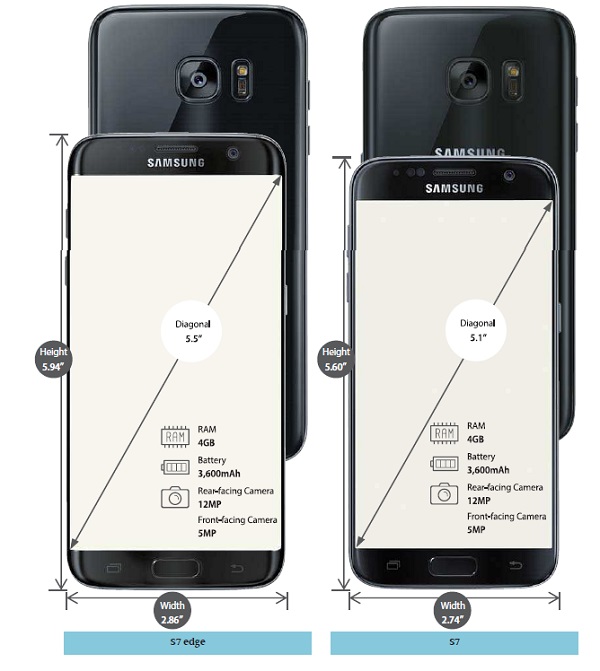 “The Galaxy S6 and S6 edge were true innovations,” said Koh, “and the S7 series takes an even bigger step forward.”

Noting that Samsung believes in a world that is “brighter, sharper, more convenient and more fun,” he said the Galaxy S7 and its cousin S7 edge have married elegant design with functionality and provide a seamless mobile experience to deliver on that vision.

“These are the devices that come from reimagining what a phone can do and what a smartphone can be,” he added.

The next-generation Android phones are equipped with more powerful cameras than their predecessors and have a water-resistance feature that was missing on the S6. The new phones can be submerged at depths of 1 meter (3.3 feet) for up to 30 minutes without damage.

Living up to the leaked information prior to the launch event, the S7 features its first dual pixel rear-facing camera with 12 megapixel resolution to deliver brighter and sharper images in low light.

It has been made possible by a brighter lens with wider aperture at F7.1, which promises a faster shutter speed and more accurate autofocus even in darker conditions.

Koh used the large screen on stage to compared the photo quality of the Galaxy S7 and rival iPhone 6s Plus.

Although there was little design innovation noticeable with the S7 series, Samsung emphasized the sleek design of the phones with durability and ergonomic curves for a comfortable grip.

The S7 has a 5.1-inch Super AMOLED display, the same as the S6, whereas the S7 Edge variant features a 5.5-inch curved screen - the same size as Apple’s most recent iPhone 6s Plus model. Both new phones are equipped with an enhanced battery capacity - 3,000 mAh for the S7 and 3,600 mAh for the S7 Edge, an increase of 38 percent from S6 Edge.

The curves on both edges of the S7 Edge haven’t evolved much from the S6 Edge. The edges only provide shortcuts to certain apps, tasks and contacts. Earlier expectations suggested the edge would provide more useful functions.

Unveiled alongside the S7 phones was a new 360-degree camera for taking spherical photographs that can be viewed in its Gear VR headset.


The new product is compatible with select Samsung smartphones including the S7, S7 edge as well as the S6 edge+, Note 5, S6 edge and S6.

“The Gear 360 is critical to help Samsung to persuade consumers it is time to upgrade their two or three year old smartphones, which cannot benefit from new VR experiences teased by the Gear 360,” said Ian Fogg, head of mobile analysis at market researcher IHS Technology. “In effect, Gear 360 is a marketing vehicle for the Galaxy S7, as well as for Samsung’s Gear VR headset.”

Much is at stake with S7 series for Samsung, which has seen a disappointing sales record of its last few series of phones that came after the blockbuster S4.

The Galaxy S7 event came a day before the opening of the 2016 edition of the Mobile World Congress. Samsung has kept the tradition of unveiling its new flagship phones for release in the first half of the year.

The S7 series is expected to be available for sale on March 11 and preorders will begin immediately, although prices have not been confirmed yet.

Consumers who place preorders in Korea, the United States, Europe and other select countries will receive the $99 Gear VR headset for free.