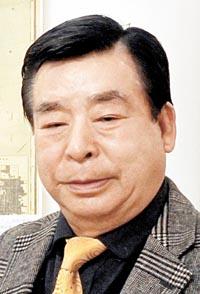 The Korean government on Monday lodged a complaint over Japan’s latest attempt to lay claim over the Dokdo islets.

Earlier in the day, the Shinzo Abe administration sent Yasuyuki Sakai, the parliamentary vice minister of Japan’s Cabinet Office, to the country’s annual Takeshima Day event, which it has held in Shimane Prefecture since 2005.

Japan refers to the Dokdo islets as Takeshima.

“We strongly protest that the Japanese government on Feb. 22 sent a high-ranking official to participate in the country’s Dokdo Day event,” the South Korean Ministry of Foreign Affairs said in a statement, in which it encouraged the Japanese government to demonstrate that it was “humbly facing up to its history of imperialistic aggressions.”

The ministry pointed out that the breakthrough deal reached in December between Seoul and Tokyo, which effectively resolved the issues surrounding the Imperial Japanese Army’s forced recruitment of women into sexual slavery during World War II, should have provided “an occasion to open a new era in bilateral relations.”

Lee Sang-deok, the Foreign Ministry’s director-general of the Northeast Asian affairs bureau, summoned an official from the Japanese Embassy in Seoul to lodge a complaint on the territorial dispute.

Since 2013, the Abe administration has sent a cabinet secretary to the local Takeshima Day ceremony, which is interpreted in Seoul as Tokyo’s attempt to exert its claim over Dokdo and exacerbate tensions over the islets.

Korea maintains that the Dokdo islets are its territory historically, geographically and by international law.

Civic organizations and students gathered in front of the Japanese Embassy in central Seoul on Monday to rally to end the Takeshima Day celebration and correct historical distortions in Japanese textbooks.

Yang Jae-ryong, the director of the Hoya Museum of Geography, emphasized the importance of “systematic education” to overcome Japan’s moves to strengthen its territorial claims over the Dokdo islets in the East Sea. And that, he said, begins with educating the Korean people on its claims over Dokdo based on clear evidence.

Yang, 69, is a former teacher who has dedicated everything he has to advocate for proper Dokdo education.

“Do you know the clear reason why Dokdo is our territory?” Yang asked. “Most people, when asked this question, become silent. To Koreans, Dokdo holds the same significance as their homeland. That is why, of course, they know Dokdo as their land, but we have been remiss on making clear why it is our territory.”

Yang decided to open a museum for this purpose.

In 1971, he began teaching geography at Namyang High School in Hwaseong, Gyeonggi, retiring in 2007. Over the course of 36 years as an educator, he visited antique stores nationwide to collect maps and other memorabilia related to the islets.

In his lifetime, he has collected 3,000 maps, of which 70 are Dokdo-related. Some 300 maps come from around the world.

After retiring, Yang bought and converted a two-story building on 1,914 square meters (20,602 square feet) of land in Yeongwol County, Gangwon, into a geography museum.

In July 2007, Yang was contacted by the owner of an antique store in Chungju, North Chungcheong, who said he had acquired a map of Dokdo.

Yang was surprised to find that this map was an 1895 Japanese military map that showed Dokdo and neighboring Ulleung Island within Korea’s borders. So he convinced the owner to sell the map, paying installments over four months.

Since then, the map has become an important source for demonstrating that Japan also viewed Dokdo as Korea’s territory.

“Starting this year, all eight of the history textbooks distributed to Japanese middle schools will include the phase, ‘Dokdo is Japan’s territory.’ However, in Korea, there are many maps that show that Dokdo is not actually Japan’s territory.

“In the future, we need to show why Dokdo is not Japan’s territory through clear evidence, like maps or documents, in our education.”