Across different events, all kinds of skis

Across different events, all kinds of skis 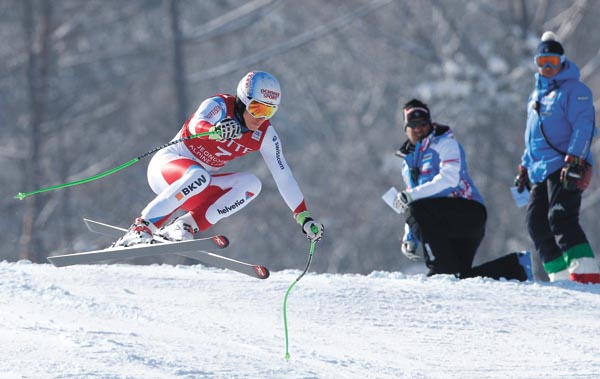 Switzerland’s Carlo Janka catches some air during a men’s super-G race, or super giant slalom race, at a test event for the Pyeongchang 2018 Winter Olympics at the Jeongseon Alpine Centre in Jeongseon on Feb. 7. Skis used in slalom race are shorter and rounder compared to skis used for downhill racing. [AP/NEWSIS]

For recreational skiers who use their equipment only a few months each year, things like the shape and length of skis seem to be trivial. But for professionals whose career depends on their equipment, the science behind those details is the difference between the podium and the stands. In fact, most non-professional skiers would be surprised to discover just how much ski equipment changes depending on event and discipline.

Test events for 2018 Winter Olympics are taking place at Pyeongchang and Jeongseon this month. The latest is the 2016 FIS Ski & Snowboard Cross World Cup, held at Bokwang Snow Park in Pyeongchang, which began yesterday. The competition is the third in the test event series following the 2016 Audi FIS Ski World Cup at Jeongseon Alpine Centre and 2016 FIS Freestyle Ski World Cup at Bokwang Snow Park.

Alpine skiing, which originated in the Alps, consists of skiers racing down a hill in fixed-heal bindings. In order to pick up speed, they use wider skis with steel edges. Skis used in the downhill category, in which a skier takes an almost straight line down the hill, are the longest in length, with the men’s exceeding 2.15 meters (7 feet) and the women’s over 2.1 meters. The length of skis get shorter in the racing categories involving turns like the super giant slalom (men’s 2.05 meters, women’s 2 meters), giant slalom (men’s 1.85 meters, women’s 1.80 meters) and slalom (men’s 1.65 meters, women’s 1.55 meters).

“The maximum speed for downhill skiers can be as fast as 150 kilometers per hour (93 miles per hour),” said Chu Jong-gil, Alpine coach for the junior national team. “There is almost no turning in the downhill discipline, which is why the skis tend to be long. Their shape also resembles chopsticks to limit the friction with snow.”

During downhill races, the gates through which competitors must pass are also wider.

Slalom races, on the other hand, see skiers hitting an average speed of just 55 kilometers per hour (34 miles per hour). But these courses feature about 60 to 70 much narrower gates, requiring the skiers to make quicker, sharper turns. For this reason, the skis used in the slalom are shorter in length, and their fronts are often round in shape to avoid getting caught by the gates.

Ski poles also differ depending on the discipline. While slalom racers use light and straight poles, skiers competing in the downhill, super giant slalom and giant slalom use longer bent poles. This is because the bent shape of the poles helps with aerodynamics during jumps or crouching running, a technique in which a skier crouches down to increase his or her speed.

Cross country skiing, often known as a marathon in the snow, is included in the Nordic skiing category. Originating in Scandinavia, the category also includes ski jumping and Nordic combined, a discipline in which athletes compete in both cross country skiing and ski jumping. The discipline requires more movement in comparison to Alpine skiing. For this reason, the skis used are narrow in width and made of lightweight material. “The skis are made of compressed carbon fiber,” said Kang Seong-tae, cross country skiing coach for the Korean national team. “Unlike Alpine skiing, bindings are not entirely fixed. They are attached only at the toe.”

There are two different sub-disciplines of cross country skiing: classic style and freestyle. In classic styles, skiers are required to propel themselves forward solely with forward strides. Freestyle skiers, in contrast, are permitted to make any movement necessary, including side-to-side motions. Classic style skis are about 30 centimeters (11.8 inches) longer in length than the height of the skier. Their fronts are also pointy, whereas freestyle skis are about 15 centimeters (5.9 inches) shorter and feature round front.

“Skiers have to move through piles of snow in classic style which is why the fronts are pointy,” said Kang.

For ski jumping, the skis are long to allow more stable landing. After Japanese skiers won two gold medals in 1998 Nagano Winter Olympics while using unusually long skis, a new regulation was made which limits the length of ski to 146% of the height of the athlete. Materials used for the skis are also restricted to glass fiber and wood.

Freestyle alpine skiing is comprised of sub-disciplines including aerials, mogul, cross, half-pipe and slopestyle. The shape of skis has some notable variations depending on the event. For mogul, where skiers are required to make sharp turns through a series of bumps, the front of skis must be rock-solid to prevent damage. In slopestyle, the back as well as the front of the ski is pointing upward to enable back flips. Skis used in aerials are short, on average about 1.60 meters (63 inches) since skiers are required to launch off a platform and spin midair.

A pair of ski may cost from 1 million won ($808) to 2 million won. Skiers possess three to four pairs each since they require separate pairs for training and competition.