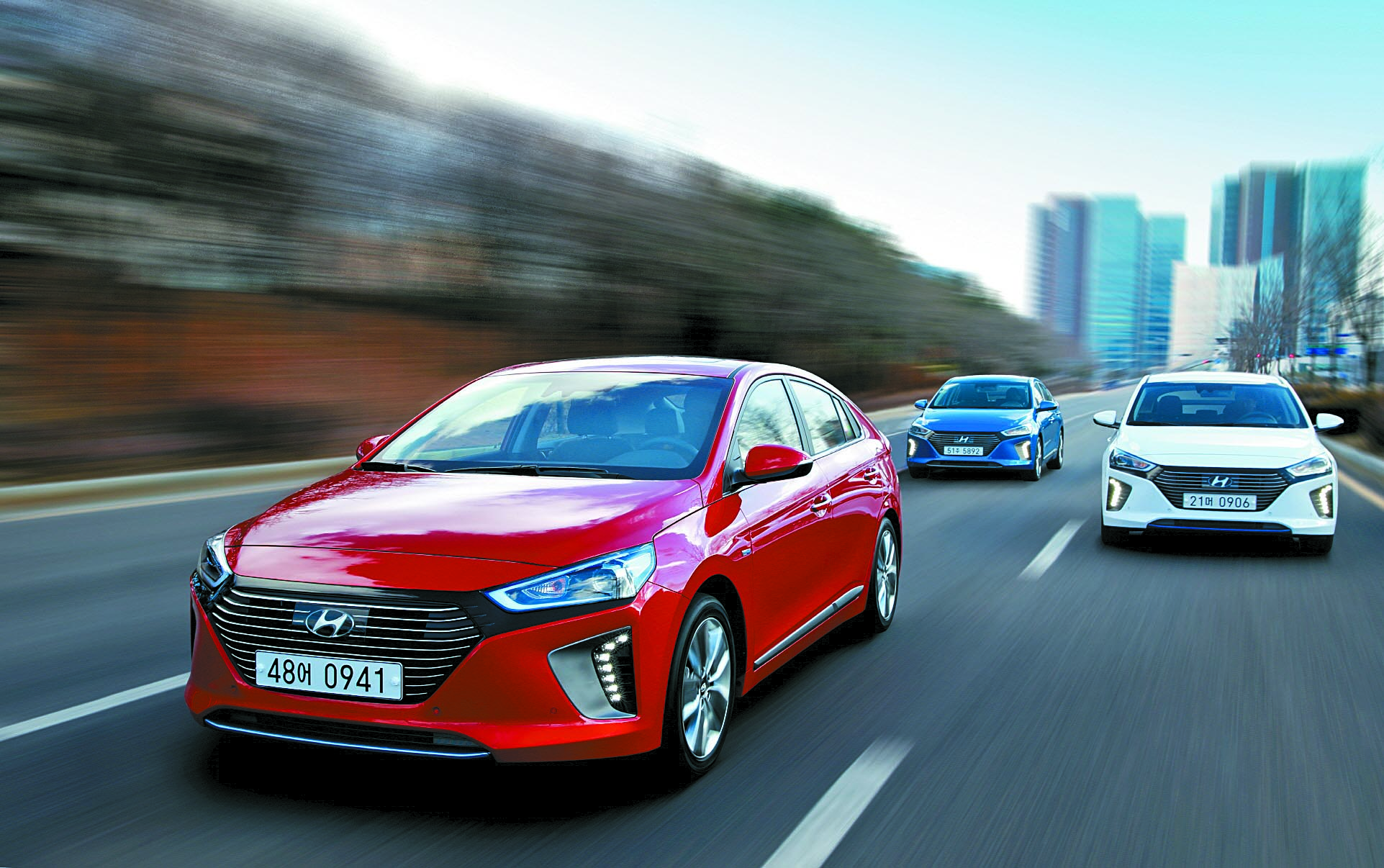 It has been more than a month since Hyundai Motor launched its much-hyped Ioniq, an environmentally friendly compact car that’s gained the nickname “Prius killer” for its competitive fuel economy and features.

The automaker said at a launch event held in January that the Ioniq will likely be the most fuel efficient in its segment, largely thanks to technicians who figured out how to dramatically lower the car’s weight by using more advanced materials.

The Ioniq only comes in hybrid, plug-in hybrid and electric vehicle models.

The Korea JoongAng Daily got behind the wheel on Jan. 20 to check out if the Ioniq really can spell doom for the Prius, taking a leisurely 90-kilometer (56-mile) round-trip course from the Mayfield Hotel in Gangseo District, southern Seoul, to the Heyri Art Valley in Paju, Gyeonggi. The test drive was done on the highest-trim model, featuring a 1.6 GDI engine and 17-inch wheels, which starts from 27.7 million won ($22,500) before tax deductions.

Most of the reporters participating in the test drive focused on the Ioniq’s fuel efficiency, the feature most hyped by the company, and the car delivered. I drove the first half of the course as I would normally do, which is to say not particularly careful about trying to get good gas mileage. I still got 22.3 kilometers to the liter, about 2 kilometers more than its official specs for the highest trim.

The basic Ioniq with 15-inch tires promises 22.4 kilometers per liter, which beats Prius’s fuel efficiency of 21 kilometers per liter. Hyundai chalks the high performance up to its combination of the 1.6-liter four-cylinder gasoline engine and six-speed dual-clutch transmission that generates up to 104 horsepower and 15 kilogram-meters (108 pound-feet) of torque.

My partner did everything he could to maximize fuel efficiency and used the all-electric mode as often as possible. He was rewarded with 27.5 kilometers per liter on our way back home, which was one of the best results of the 100 test drivers that day. Another driver reportedly marked 28.5 kilometers per liter.

The dashboard and interior design of the five-seater. The car comes in three trims - the I, N and Q - and begins at 27.1 million won (22,000 dollars). The company unveiled Ioniq’s electric vehicle model at the Geneva Motor Show on Monday, local time. [HYUNDAI MOTOR]

On the drive, I checked out the vehicle’s Eco-Driving Assistant System, which is the set of unique technologies that make the model so efficient.

When I first got in the driver’s seat, I barely noticed that the engine was already running because the car was so quiet and still.

I really enjoyed the car’s automatic charging features, as it made me feel like I was earning extra fuel efficiency while the car was still moving.

After clearing the city, I immediately increased my speed on the highway to around 90 kilometers per hour. It accelerated smoothly without making much noise and didn’t swing around in the way I have come to expect from compact cars. The car’s sensors allowed me to see whether I was staying in my lane or if other cars were approaching my blind spots.

I was less satisfied with the Ioniq’s rearview mirror, which made it hard to see who was behind me. It seemed as though the rear windshield might also be too small, as I’ve found to be the case in many compact cars. 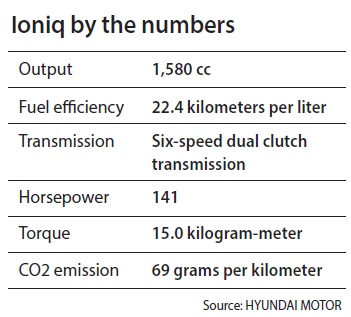 But sales in the first month since its launch proved disappointing.

Hyundai started selling the Ioniq on Jan. 14 and only shifted 493 by the end of the month. In order for the company to meet its goal, it needs to sell nearly 1,250 Ioniq units every month.

There are numerous reasons for the poor sales, including the release of new Prius and Chevrolet Volt models this year.

Other experts attribute the sales to plummeting crude prices, which might have led potential customers to focus less on fuel efficiency when looking for a new car.

Some local media outlets have reported that Ioniq sales in February are increasing very fast, though official data has yet to be released.