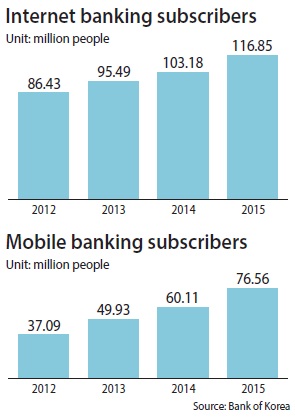 Thanks to traditional banks’ efforts to go mobile, online banking subscribers using both computers and smartphones hit a record number.

According to the Bank of Korea on Thursday, the number of subscribers to Internet banking services reached 116.85 million as of the end of 2015, up 13.2 percent from a year earlier. The number includes individual and corporate subscribers.

Daily Internet banking transactions ballooned to a record high of 40.28 trillion won ($33 billion), rising 9.3 percent in the same period, while the number of daily transactions processed via the Internet reached 42.39 million.

The amount of money transferred via mobile phone services accounted for 6.2 percent of the total, the data showed, which suggests consumers prefer Internet banking to mobile banking when they need to handle large sums of money.

The number of transactions on mobile services hit 42.39 million, comparable to that of Internet banking services.

“A noticeable trend is that the proportion of people in their 40s using mobile banking services grew from 36.9 percent in 2014 to 40.2 percent in 2015,” the Bank of Korea report said.

The number of mobile banking service users surged 45.5 percent over the past one year, it added.

Commercial banks are introducing mobile services that enable their customers to create bank accounts, take out loans and convert foreign currencies via smartphone applications based on an eased regulations that allow non-face-to-face personal identification in financial transactions.