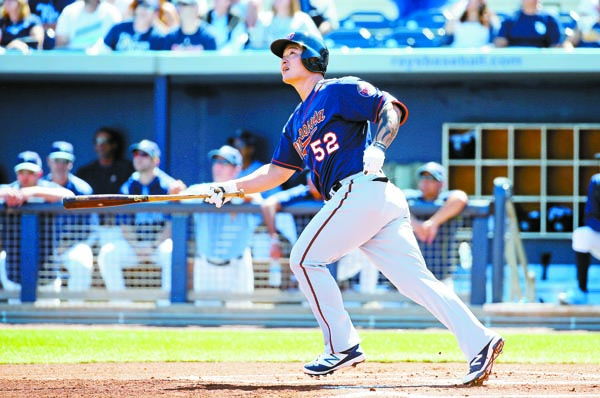 Minnesota Twins’ Park Byung-ho hits a grand slam in the first inning of a spring training exhibition game yesterday against the Tampa Bay Rays in Port Charlotte, Florida. This is Park’s first home run in the Major League. [AP/NEWSIS]

Minnesota Twins slugger Park Byung-ho knocked one out of the park for a grand slam yesterday for his first Grapefruit League game home run, helping the Twins defeat the Tampa Bay Rays 5-4 in Port Charlotte, Florida.

The homer by the 29-year-old first baseman came in the first inning when Park smacked the third pitch by the Rays pitcher Jake Odorizzi. Park stepped on the field sixth in the batting order with the bases loaded and two outs.

Park joined the Twins as a free agent in December 2015 with a four year contract worth $12 million including incentives. He previously played four seasons with the Nexen Heroes in the Korean Baseball Organization. In his last season, he led the Korean league with 53 home runs and 146 RBIs.

Park added one hit, four RBIs and two runs-scored in three at-bats yesterday to tally two hits, one home run, five RBIs and three runs-scored in 11 at-bats for the Twins during the preseason so far. Park’s first hit came in a spring training game against the Boston Red Sox on March 4. He drove in his first run on March 6 to score for the Twins against the Baltimore Orioles. With his first MLB home run yesterday, Park is clearly adjusting well to the Big League.

But according to Park, the home run was neither expected nor something to be too excited about. Although he made “solid contact,” he thought the strong winds would keep the ball in the park. “I thought it was a double,” said Park. “So I stopped running. But they were yelling ‘home run’ and that’s when I realized it was a homer. I didn’t aim for it and I also know that it is not something to hype up. We are only in the exhibition games at the moment. Players don’t go all out. We are just preparing for the regular season.”

“Today’s home run is definitely a good sign for Park,” said Molitor. “He has been adjusting well since the preseason began.”