Lotte founder kicked from Confectionery board

Lotte founder kicked from Confectionery board 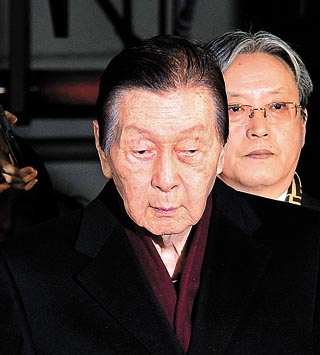 Lotte Group founder Shin Kyuk-ho will be removed from the board of Lotte Confectionery for the first time in the company’s history, adding to evidence that the second son, Chairman Shin Dong-bin of Lotte Group, is tightening his grip amid a prolonged battle over control of the conglomerate.

A statement to the Korea Exchange confirmed Monday that the confectionery maker won’t re-elect the founder as a board director during the upcoming regular shareholders meeting, as the seat is set to expire this month.

Among the proposed agenda was the re-election of existing board members and selection of new members, along with a stock split of Lotte’s major affiliate.

While the re-election of Chairman Shin and Kim Yong-su, CEO of Lotte Confectionery, will be put to a vote, the name of the 93 year-old founder was nowhere to be found on the statement.

Lotte Group cited the founder’s old age and mental health as the reason for the decision.

“Because of his old age and poor mental and physical condition, a hearing to determine the mental state of the founder is underway,” the source at Lotte Group said, requesting anonymity. “We determined [the founder] would have a hard time making rational decisions in management.”

The new board members to undergo a vote of confidence during the March 25 meeting include Hwang Gak-gyu, president of policy coordination at Lotte Group, and Min Myung-ki, managing director at Lotte Confectionery.

The move deals a major blow to the older son and founder after the board of Lotte Holdings, the de facto holding company of Japan’s Lotte Group, voted to remove General Chairman Shin Kyuk-ho last July.

The dismissal came after the elder son attempted a coup against his younger brother. Since then, the father and elder son have waged battles, both legal and public, to retake the seat and oust the second son from Lotte Holdings.

The removal at Lotte Confectionery signals another defeat, since the unit is considered a core affiliate with over 2 trillion won ($1.7 billion) in sales. The snack maker is involved in 54 of the 67 cross-holding share links among Lotte affiliates.

The founder’s standing is expected to face trouble going forward as many industry watchers predict the nonagenarian will be stripped of his board seat at other key affiliates.

His term at Hotel Lotte, an unlisted hotel operator at the top of Korea’s Lotte operations, will end within March unless shareholders vote to retain his post.

He will face the same confidence test at Lotte Shopping, Lotte Construction and Lotte Aluminum next year.