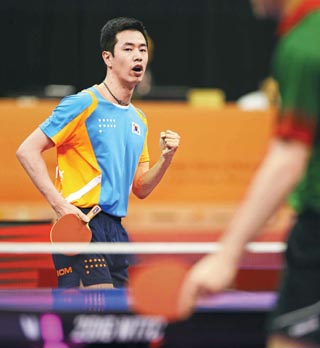 South Korean Joo Sae-hyuk is deemed one of the top defensive table tennis players in the world. Joo is determined to pave the way for a better future for South Korean table tennis by bringing home a medal in the last Olympics of his career.[KOREA TABLE TENNIS ASSOCIATION]

China dominates the world of table tennis with overwhelming speed and power.

The small plastic ball flies across the table at speeds over 100 kilometers per hour (62 miles per hour) when smashed by attackers such as world No. 1 Ma Long of China. In the midst of top ranking players who specialize in an attacking style of play is No.16 Joo Sae-hyuk of South Korea who demonstrates that sometimes good defense, as well as patience, is the best offense.

Joo is one of few table tennis players today who acquired his success and fame with a brilliant defensive style of play. His trademarks are his backspin chops and slices against opponents’ drives.

At the Perfect 2016 World Team Table Tennis Championships in Kuala Lumpur, Malaysia on Friday, Joo put up an epic fight against Portugal in the quarter-final of the men’s event. Despite pain in his back and hip, he helped the South Korean men’s team to advance to the semi-final for the first time in four years.

Joo beat Marcos Freitas with the set scores of 11-6, 11-8, 13-15 and 11-3, and added another win in the fourth duel against Joao Monteiro with the set scores of 11-5, 10-12, 12-14, 11-7 and 11-9. Joo’s slices and defensive technique overpowered the No.11 Freitas and No.45 Monteiro during the event. His defensive rally against relentless attacks by the Portuguese players left the audience in awe. “Playing two consecutive games was burdensome,” said Joo about the match against Portugal. “But I wanted to finish off the match with my own hands.”

When Joo receives the shot from his opponents, he negates the attacking stroke with his signature backspin chop. By doing so, he lengthens the rally, eventually wearing out opponents with the extended rallies. “It’s exhilarating when I weaken my opponents’ attack,” said Joo. However, backspin chops and slices are not his only weapons. Catching his opponents off-guard, he smashes a forehand drive to attack when it is least expected.

Joo’s kaleidoscopic style of play is popular among overseas fans. In 2003 when Joo placed second in the world championship in France, his play was known as ‘art pingpong.’ Joo’s Chinese counterparts dubbed him the ‘No.1 defensive player in the world.’ When asked about his popularity among foreign fans, Joo said, “When I attend the events outside of Korea, there are some fans who hand me snacks to eat.”

Joo began playing table tennis when he was in the third grade. He decided to adopt a defensive style when his coach told him he could be an outstanding player if he became a defensive player because of his calm and poised character.

But it was not always smooth sailing for Joo. He realized that there was no fast way to become a brilliant defensive player when he was in middle and high school. He also understood that he will not be able to survive depending solely on a defensive strategy. Since then, Joo started to train on offensive techniques. This is when Joo began learning how to switch between offensive and defensive skills to become the all-round player he is today.

Although Joo was considered a mediocre player in the early stage of his career, he became the leading player in Korean table tennis after placing second at the Liebherr 2003 World Table Tennis Championships in Paris, France.

Joo was a part of the Korea Armed Forces Athletic Corps at the time and credits his military experience as a turning point. “I learned how to enjoy the game then,” said Joo.

After 2005, Joo began to dominate various domestic events and led the national team to win silver in the 2006, 2010 and 2014 Asian Game Men’s team events. At the 2012 London Olympics, Joo overcame Behcet’s Disease to help the team win another silver in the men’s team event.

Behcet’s Disease is a chronic autoinflammatory disorder that causes excruciating pain due to the inflammation of blood vessels. When asked about his condition, Joo said, “I have to notify the International Table Tennis Federation (ITTF) prior to the upcoming Rio Olympics because some of the medication I consume contains banned substances by the International Olympics Committee. But the disease does not bother me as much as it did four years ago in London.”

The Rio Olympics will be the third Olympics in his career as well as his last stage in the national team. Joo initially intended to return the Korean uniform after the London Olympics. However, his continued success on the international stage kept him on the national team a little longer.

“Korean table tennis is deemed to be at the verge of crisis,” said Joo when asked about his determination for his last Olympics. “We really need a medal at this point. I want to be a proud father to my two sons and conclude my career as a table tennis player with a good result.”