The Ministry of Strategy and Finance has acknowledged that global and local economic development has been worse than it anticipated at the end of last year. But it has also stayed positive despite growing concerns from other institutions, most recently the state-run Korea Development Institute.

The ministry’s optimism, shared by President Park Geun-hye earlier this week, is contradicted by data from organizations like the central bank, which has shown that businesses are cutting back on investment and expansion while households are applying for riskier loans.

“It’s true that this year is much more difficult than last year,” said Kim Byung-hwan, an official at the ministry’s comprehensive policy department. “The situation turned out to be worse than what we anticipated, and there are greater downward risks we didn’t expect.”

But the ministry once again kept to its earlier position that the economy is showing signs of improvement, including a lower drop in exports in February, increasing exports by volume and improvement in automobile sales largely thanks to the re-lowering of the individual consumption tax.

In fact, some indicators showed that the decline in February eased compared to the first month of the year. Exports fell just 12.2 percent compared to the 18.8 percent plunge in January. Exports by volume turned around from a 5.3 percent decline to an 11.2 percent increase during the same period. Automobile sales in the domestic market are estimated to have risen 9 percent year on year, a turnaround from the 4.5 percent decline recorded in January. Credit card approvals last month still saw double-digit growth of 14.2 percent despite slowing from January’s 15.8 percent. 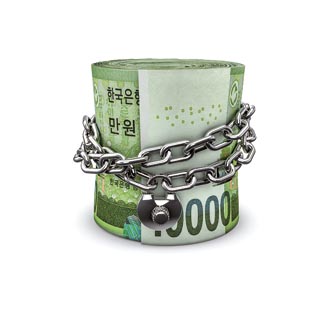 The government also expects industrial output to improve in coming months with the release of Samsung’s latest Galaxy S7 and S7 Edge smartphones.

Kim brushed off growing speculation that the Finance Ministry has been too optimistic.

“Technically speaking, the carryover from 2013 to 2014 was weak, whereas this time, the situation is much better,” Kim said. “We will do our best to reach 3 percent growth even if the recovery pace is slow. I assure you that our approach to and perspective on the current economic situation is not nonchalant.”

But there have been growing concerns about the government’s approach to the economy. Experts have said that if the government proceeds based on an overly optimistic position, it could worsen things further by becoming further mistrusted by the market.

According to data released by the Bank of Korea on Wednesday, fresh loans borrowed from companies declined last month, indicating that businesses may be cutting back on investment or possible expansion.

Last month, 2.4 trillion won ($2 billion) in fresh corporate loans were borrowed from banks. This is a 65 percent drop from the 6.9 trillion won borrowed in January. Even when compared to a year ago, it is less than half of the 4.8 trillion won recorded. 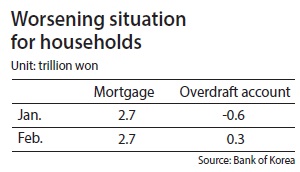 “Corporate loans were reduced sharply as some of the conglomerates have been trying to improve their financial structures,” said Lee Jeong-hun, head of the financial markets department at the central bank.

Korea’s finance minister, however, expressed the most concern with deteriorating confidence.

“More concerning than the economic situation itself is the sentiment,” Finance Minister Yoo Il-ho said. “I believe the most important policy project at hand is to improve economic confidence.”