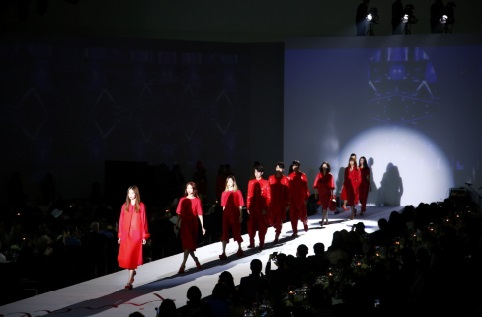 The fall-winter edition of Hera Seoul Fashion Week will kick off on March 22 at Dongdaemun Design Plaza in central Seoul and an abandoned milling factory in Mullae-dong, southwestern Seoul. Above is a finale of the 2016 spring-summer show at the plaza in October. [SEOUL DESIGN FOUNDATION]

Organizers of Hera Seoul Fashion Week have been busy laying out catwalks for the upcoming fall and winter show that will kick off on March 22 for five days. Although the event has been shortened from the previous seven days to just five starting from this season, the Seoul Design Foundation, the organizer of the show, says the event will be better than ever as it has decided to hold a fashion trade show called “Generation Next Seoul” in Mullae-dong, southwestern Seoul, at the same time as the fashion week.

“We’ve decided to shorten the days to five as we found out that foreign buyers who visit Seoul stay here for a maximum of five days and inevitably leave without seeing some of the shows on the latter days,” said fashion designer Jung Ku-ho, who was appointed to run the fashion week since the last show in October.

“That’s a lose-lose situation for both designers and buyers, so we decided to shorten the days this season but hold a fashion trade show in line with the fashion week to provide a platform and time for buyers to meet designers more intimately.”

Although it’s a little far - about 30 to 40 minutes by car from Dongdaemun Design Plaza (DDP) in central Seoul, the venue for Hera Seoul Fashion Week - Jung said he wanted to hold the trade show at the Daeseon Milling Factory in Mullae-dong, explaining that the abandoned milling factory will provide a contrast to the ultramodern DDP.

“I wanted to give international buyers a contrasting experience in Seoul,” Jung said. “The DDP is one of the most futuristic-looking buildings in Seoul, while this abandoned factory that will transform into a fashion show venue will offer them a rare opportunity to witness an old side of Seoul during their visit.”

About 100 booths from local fashion designers will be installed at the venue, and there will also be mini fashion shows for the buyers to watch. To offer a more private and relaxing time for international buyers to sit down with designers and casually talk at the trade show, the organizers decided to prohibit the general public from accessing the show from 9 a.m. to 3 p.m., while opening the doors to all after 3 p.m.

The venue will also be open to the general public for the whole day on the final day of the event on March 26. Shuttle services will be provided every 30 minutes to transport visitors between the DDP and factory.

A total of 41 shows will be held at the DDP during the fashion week, while the trade show will feature 10 shows with three brands per show.

Organizers also decided to hold a “Global Mentoring Program” during the fashion week by selecting 10 fashion industry leaders who will be visiting Seoul for the show. The 10 mentors - including Simon Collins, former dean at the Parsons School of Design; Donald Potard, fashion design department chair at the Paris College of Art; and Sarah Mower, a renowned fashion critic and columnist - will hold seminars and talk about their thoughts on Hera Seoul Fashion Week and what more needs to be done for the Korean fashion industry to successfully penetrate the global fashion scene.