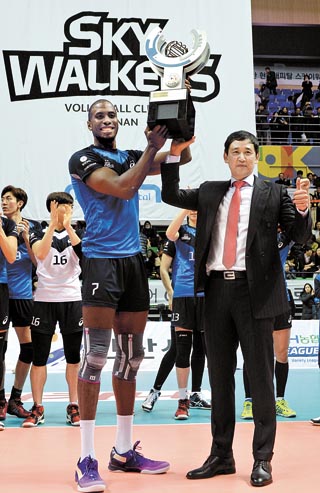 The Cheonan Hyundai Capital Skywalkers were not considered to be championship material before the season started. Given their performance last year, such an outlook was expected. However, no one could have imagined such a dramatic change.

When asked about the team’s success at a press conference on Tuesday, manager Choi Tae-woong said, “No one on our team has held the regular season first place trophy except one person in the coaching staff, so every one of us was desperate to win. We have the momentum now with our winning streak, but we cannot be arrogant. We will play this game in the finals as the humble underdogs that we have been all season.”

As Choi said, the Skywalkers were truly the underdogs this season. After placing fifth last season, a transformation seemed inevitable for the Skywalkers. Thus, before the season began, the Skywalkers roster saw some changes as the former star of the Gumi LIG Insurance Greaters (the current Gumi KB Insurance Stars), Oreol Camejo, who left Korea two seasons ago, found his way back to join the club. Young players such as setter Noh Jae-wook also joined the roster.

Some people saw the new additions as an ominous sign for the Skywalkers, saying it would throw off the team’s rapport. Despite the skepticism, however, the new and old players bonded well and eventually paved the way for the Skywalkers to set a new V-League winning streak record with 18 consecutive wins.

“What looks useless and poor in quality on the outside can in fact be very useful once the box is open,” Choi said. “That’s the exact description of our team.”

“We are not sure how long we will maintain the pace, but we will go all the way and come out with the championship title,” he added.

Before the season began, it was the defending champions Ansan OK Savings Bank Rush & Cash that were expected to win again this year. They had the talent and experience, but injuries hindered the team’s success. Most notably, starting setter Lee Min-gyu was out for the season with a shoulder injury. Rush & Cash manager Kim Sei-jin attributes the team’s second-place finish to this and other injuries.

“We would like to wrap up the playoffs as soon as possible to prepare for the next season. The injuries among the players are severe and they need some time off to recuperate,” Kim said at the press conference. “Still, we cannot use injuries as excuses.”

The Skywalkers will play their first playoff game in the finals on Friday against the winner of the semi-finals match between the Rush & Cash and the Daejeon Samsung Bluefangs.