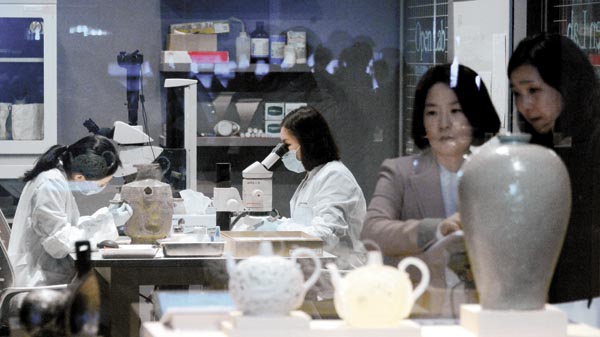 Conservation scientists at the National Museum of Korea work inside an open lab that’s installed in the museum’s “Conservation Science: Saving Cultural Properties” exhibition that was organized to celebrate the 40th anniversary of the establishment of the Conservation Science Division. The exhibition will run until May 8. [NEWSIS]

People are not the only ones needing the help of medical technologies like X-rays, CT or MRI scans. Degraded cultural properties, too, have benefitted from these technologies in recent years to be better restored and understood.

For example, in order to restore several water droppers from the Joseon Dynasty (1392-1910) to their original state, the artifacts underwent X-rays and CAT scans.

Made of white porcelain, these cube-shaped water droppers each featuring different exterior designs were restored in 1986. But it was only last year when they were inspected once again with modern technology that scientists discovered that the inner containers have the shape of a haetae, or mythical unicorn lion.

It’s been 40 years since the National Museum established the Conservation Science Division. When it first started in 1976, the team only consisted of two researchers - the late Lee Sang-soo (1946-98), who is known to have contributed greatly to restoring many Korean cultural properties, and Lee Oh-hee, 68, former chair professor of Korea National University of Cultural Heritage. But today the division has 30 researchers who are working to conserve, restore and understand cultural properties. To mark the division’s 40th anniversary, the National Museum organized an exhibition to show how conservation science has developed. 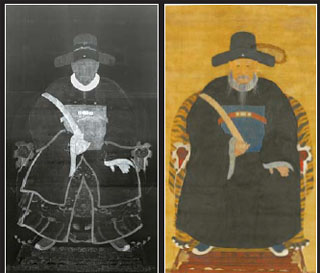 A portrait believed to be of Jeong Gongsu, right, was scanned using X-rays, left, revealing what the rough sketch looks like. [NATIONAL MUSEUM OF KOREA]

“Conservation Science: Saving Cultural Properties” kicked off last week and will continue until May 8 at the National Museum in central Seoul. On display are 57 cultural properties and about 60 other artificial mock-ups and videos to help visitors better understand the conservation process.

In the first section, titled “Looking Inside Cultural Properties,” visitors can witness how technological advancements greatly influenced the conservation of cultural heritage as well as the investigation and analysis of cultural properties that were previously restored. Today, various optical instruments employing light of various wavelengths to learn about “historical attributes that are inaccessible to the naked eye, and therefore may have otherwise remained locked within the cultural properties,” according to the museum.

For example, the exhibit includes a portrait of Choe Chiwon from the Joseon Dynasty. Researchers analyzed the painting using X-ray and X-ray fluorescence spectrometry in 2009 after noticing that the bottom right corner had been painted over. Through the scanning, researchers found that beneath the current depiction of books and writing utensils there was previously a young monk.

“There needs to be more research done to find out why this corner was painted over to cover this young monk with stacks of books,” said conservation scientist Cheon Ju-hyun. “But finding this out in recent years using modern technology itself is very significant.”

“It can be compared to the medical procedures applied by a doctor while treating a patient, since they determines how to best manage damaged cultural properties after identifying the materials involved and the severity of the damage,” the museum said.

A phoenix-shaped glass bottle, National Treasure No. 193, was also restored again in 2014. When it was first excavated in 1979, it was shattered in about 480 pieces. It took six years to glue the 0.3-millimeter-thick glass pieces together. But 30 years later, it underwent another round of restoration to replace old materials that had yellowed.

The final section, “Extending the Life of Cultural Properties,” shows how museums work to minimize the damage to cultural properties by natural factors such as temperature, humidity and pollutants. 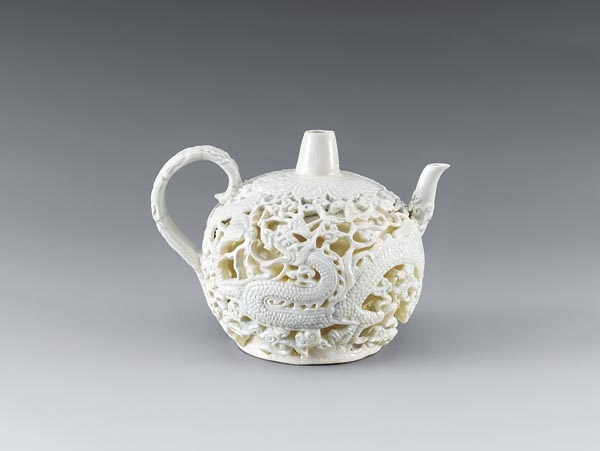 Visitors can also see how conservation scientists work in the Open Lab corner. Inside the glass lab, scientists will be working on restoring cultural properties.

“The exhibition will definitely satisfy the curiosity the general public has toward cultural properties,” said Lee Yong-hee, head scientist of the Conservation Science Division.