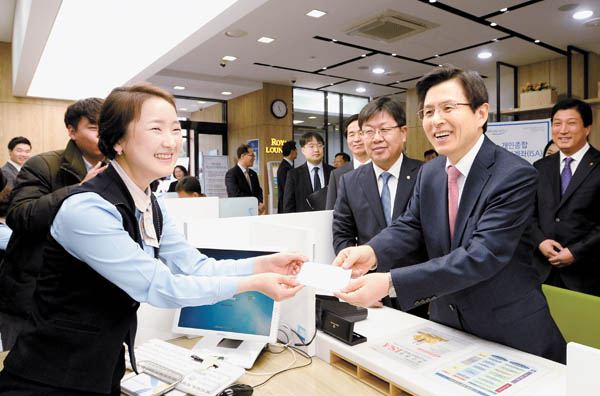 Thirteen banks, 19 brokerages and one insurer rolled out the new investment platforms, according to the Financial Services Commission (FSC).

The financial regulator decided last year to introduce the new system in Korea to diversify investment options for consumers who have suffered near-bottom interest rates through their bank savings. It hopes ISAs will boost the domestic economy by raising household income as well as private consumption, and give more people access to asset management services to prepare for retirement.

“I would say people of mid-level income, who earn from 50 million won [$42,100] through 100 million won every year, will be the largest beneficiaries of the ISA’s [tax cut benefits],” Hwang said at the ceremony. “I think more people will sign up after looking at the returns in the first few months.”

There are two types of ISAs available: an entrusted ISA, in which customers give all management decisions to asset managers, and the ISA in trust, where subscribers allocate their own funds.

On the first day of the launch, banks were less crowded than expected, because they only rolled out ISAs in trust. They currently do not have a license for the asset management businesses. They will start launching entrusted ISAs by late April after being granted the licenses.

Brokerage firms introduced the entrusted ISAs with nine or more asset allocation samples which financial experts will manage once customers pick a wealth-distribution sample depending on their personal preference. Customers can entrust all investment decisions by paying management fees of 0.1 to 1 percent every year, a lot cheaper than existing asset management services.

The ISA system allows income earners of all levels to manage a variety of financial accounts, ranging from regular savings to riskier securities accounts, in one comprehensive account. The government imposes no tax on up to 2.5 million won in net profit from investments made in the account system per year. If an individual earns more than 2.5 million won in investment return, they pay only 9.9 percent of income tax on the extra amount, cheaper than the current 15.4 percent.

Account holders can deposit up to 20 million won every year, but they have to hold it for three to five years to benefit from the tax exemption.

Brokerages suggest customers pick a sample that best reflects their investment goals, as an account cannot be canceled midway through the policy term and there is no guarantee of the principal amount at the end of the term.

Thirteen brokerage firms prepared a total of 108 investment options, most of which are focused on mid-risk situations. Depending on a customer’s goal, they can choose from five categories: super low-risk, low-risk, mid-risk, high-risk and super-high risk. Higher management fees are imposed on each investment option, and the rate becomes more expensive on higher risk plans.

Brokerages are banned from promising certain returns to the customers, but they aim to yield somewhere between 3 to 7 percent annually.

Most mid-risk products allocate a higher portion of assets to repurchase accounts, bonds and hybrid bond funds, while many lower-risk products that may yield about 3 to 4 percent a year are designed to allocate more money into money market funds or short-term bonds in the local market.

Kiwoom Securities rolled out 14 asset allocation options, most of which are focused on mid-risk options.

“Our utmost goal is to help customers yield higher than bank savings interest rates, while reducing risks as much as possible to secure the principal,” a Kiwoom representative said.

Any investment option will yield better returns than savings accounts, the brokerages say, but many experts warn that consumers should subscribe to them later in the year after the pros and cons become clear.

The Financial Consumers Agency warned consumers to be careful before signing up as they may spend too much on management fees.

“Financiers are urging consumers to sign up with more risky options to profit from higher management fees,” the agency wrote in a statement on Monday. “When added up, the cost could end up larger than the tax benefits.”

The FSC is scheduled to compile the ISA’s money management results and announce it after the first three months of operation.