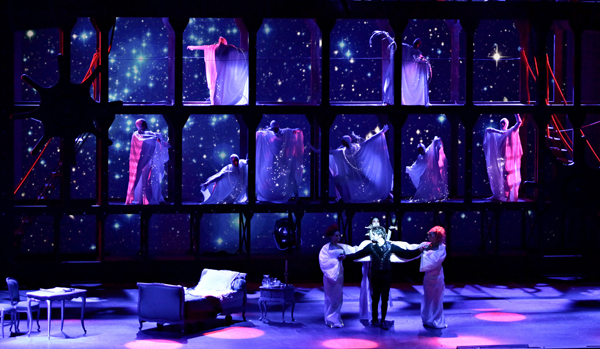 “Amadeus,” an original French musical, is being staged at the Sejong Center for the Performing Arts in central Seoul through next month. [MAST ENTERTAINMENT]

To Sunday: “Frankenstein” took Seoul by storm when it premiered two years ago. It won nine awards, including Musical of the Year, at the 2014 Musical Awards.

Loosely based on the legendary story by Mary Shelley, it tells the tale of scientist Victor Frankenstein, who, at the height of the Napoleonic Wars, befriends Henry Durpres. Together, they attempt to create “an immortal soldier,” but the experiment goes awry, and a monster is born. Actor-singer Yoo Jun-sang, who won the award for Best Male Leading Actor in 2014, is again playing the role of Frankenstein.

Ok Joo-hyun, a musical actress who was once a member of the K-pop girl group Fin.K.L, and Kim So-hyang are playing the lead role.

July 12 to Aug. 28: A blockbuster Broadway musical, “Wicked,” is coming to Korea with an exciting cast for ardent theatergoers. Cha Ji-yeon and Park Hye-na will play Elphaba, and Jung Sun-ah and Ivy will play Glinda. The four divas will make the show extra special.

The performance starts at 8 p.m. on weekdays; and 2 and 7 p.m. on weekends and holidays. There are no shows on Mondays.