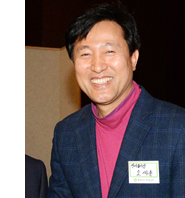 Former Seoul Mayor Oh Se-hoon returned to the political arena Tuesday, seizing the ruling party ticket over his formidable rival in the primary.

The Saenuri Party announced that Oh will run for Seoul’s Jongno District in the April 13 general election.

Lee Han-koo, the chairman of the party’s nomination committee, said Oh defeated former three-term lawmaker Park Jin in the party primary, though the specifics were not made public.

However, he stepped down the following year after losing a referendum on the city’s free school lunch program.

Over the past three weeks, Oh’s approval ratings as a potential presidential contender have risen consistently, polls by Realmeter showed. In the latest survey conducted last week, Oh recorded 11.4 percent to rank third, beating out Ahn Cheol-soo, the co-chairman of the liberal People’s Party.

Moon Jae-in, the former chairman of the main opposition Minjoo Party, recorded 21.2 percent, keeping his position as frontrunner, while Kim Moo-sung, the chairman of the Saenuri Party, took second with 17.6 percent.

On Tuesday, the ruling party also announced 11 other nominations, which included those for sitting lawmakers, Reps. Hong Il-pyo, Kim Ki-sun and Kim Han-pyo. They will seek reelection in their districts.

It was anticipated earlier in the morning that the ruling party would announce the fates of controversial lawmakers, Reps. Yoo Seong-min and Yoon Sang-hyun.

Rep. Yoo, a three-term lawmaker and former floor leader of the ruling party, was once a key ally of President Park Geun-hye, though the two parted bitterly last year after she publicly condemned him for practicing a “politics of betrayal.”

Park loyalists have consistently argued that Yoo and his associates have a different philosophy and political identity from the Saenuri Party, based on Yoo’s previous speeches at the legislature.

As the ruling party’s floor leader, Yoo addressed the National Assembly in April 2015 criticizing the Park administration’s promise that the government would expand social welfare programs without raising taxes.

Yet, while Yoo’s fate remained unclear, the ruling party ousted Monday night four sitting lawmakers in Daegu, where 11 districts are up for grabs. Yoo represents Daegu’s Dong B District.

But sources in the ruling party said it wouldn’t be easy for the party to rule out Yoo.

“If he is eliminated, the party will have extremely difficult races in the capital region, and Park’s loyalists know this,” an official on the nomination committee said, fueling speculation that the Saenuri would keep Yoo, but expunge his allies to diminish his influence.

Yoon found himself mired in controversy last week after an audio clip of a telephone conversation was leaked to the media. In the recording, Yoon can be heard telling an unidentified person that Saenuri Chairman Kim should be “weeded out” and “crushed.”

The Saenuri’s nomination committee announced last night that it will not nominate Yoon this time.