Jaguar’s stripped-down XE is a joy to drive

Jaguar’s stripped-down XE is a joy to drive 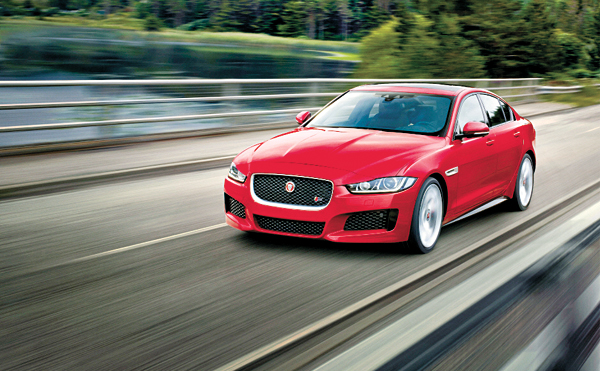 Many new high-end cars are eager to flaunt their fancy safety features or user-friendly additions like gesture control.

The luxury sedan makes the case that these bells-and-whistles miss the point of shelling out for a swanky new ride: the actual driving performance.

After taking it for a spin, it’s a convincing argument. The XE is a joy to drive, and it’s definitely an option to consider for local consumers seeking an entry-level imported sports sedan like the BMW 3 Series, Audi A4 and Mercedes-Benz C-Class.

Jaguar has traditionally focused on mid-to-large size cars and high-performance sports cars, but has recently jumped into the compact sedan market, known as the C-segment, to attract young and female consumers. The XE is the company’s first car in the segment.

The Korea JoongAng Daily sat behind the wheel of the sedan last week on a 160-kilometer round-trip course from Seoul to Chuncheon, Gangwon.

It took less than a minute to discover the defining characteristics of the XE. From the car’s bucket seats, which have the driver a bit lower than in other sedans including the BMW 3 Series, I felt the company’s roots in race cars to be alive and well. 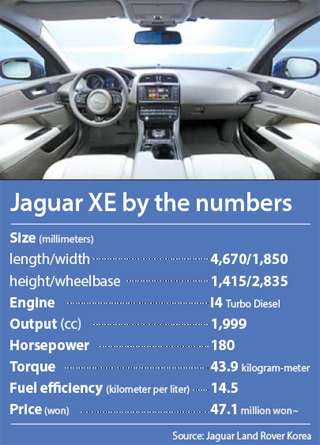 Another notable feature is its quick acceleration, which seemed to be encouraging me to speed. As soon as I forced on the gas, the XE’s 2.0-liter Ingenuim engine offering 180 horsepower and 43.9 kilogram-meter (29.4 pound-foot) of torque roars to life. Its revolutions per minute (RPM) increased to between 2,000 and 2,500 in seconds while quickly shifting gears. The engine was developed by Jaguar solely for the XE, and it’s able to provide a strong level of torque even at low speeds thanks to its turbo charger system.

The Jaguar quickly leaped forward and soon hit over 100 kilometers per hour. But the acceleration provided by the diesel engine and eight-speed auto transmission is made enjoyable by the stability felt when cornering. I have no complaints about the driving performance. I was a little hesitant at first about the low-slung seats, but it wound up just making me focus more on the driving. The car took care of the rest.

Jaguar said the secret of the car’s performance is how its weight is balanced, as all 1,670 kilograms (3,681) of the car is split nearly equally between the front and back. The balance was made possible by a body that is 75 percent aluminum, which the company says lowers the car’s weight while strengthening torsional rigidity.

It began to rain during the drive, but this didn’t faze the car on the curvy roads near Nami Island because of its All Surface Progress Control (APSC), which the company unveiled for the first time on the XE. APSC is an electronic control system that helps similar rear-wheel based cars perform at their best in any ondition by improving grip power even on roads covered with snow, ice and rain.

At first, the car’s simplistic design seemed almost embarrassing. It only offers standard features like air conditioning and a stereo, and it lacks fancy safety options like a partially autonomous driving system or lane departure warning. But after being on the road for a few hours, I understood what the car was trying to tell me: Just enjoy the ride.

By the time I was finished, I knew that even if there had been a self-driving feature, I wouldn’t have used it. I wouldn’t want to have missed a second of the XE’s performance.