Mothers struggle to care for kids

Mothers struggle to care for kids 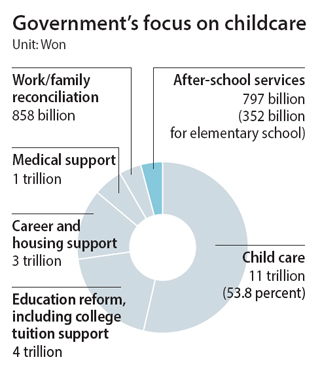 When the time finally arrived for Park Seon-oh to send her son off to elementary school last year, a tide of emotions overcame over her.

The 40-year-old piano teacher was apprehensive about the prospect of being a working mom, particularly in light of the fact that her son would leave school at one in the afternoon, five hours earlier than the time she finished work.

Her own mother had been looking after him, but she was aging, too.

In order to keep her son busy for those five hours, Park signed him up for after-school classes and sent him to a Taekwondo center.

When Park arrived home at 6 p.m., she spent three whole hours doing domestic work and then another hour checking her son’s homework.

Park spent every single day for an entire semester like this, until she finally threw in the towel. Resolved to fully commit herself to her children, Park quit her job in August, during her son’s summer break.

She had worked two full decades as a piano teacher.

“I just felt really sorry for my kids,” says Park. “And I was worn out.”

According to recent statistics tallied by the National Health Insurance Service, 31,789 working moms in their 20s through 40s who have children in elementary grades one, two or three quit their jobs last year and sought health insurance coverage through their spouses.

In analyzing this trend, local demographic pundits argue many Korean women in this social category feel pressured to leave work and focus on their children after realizing how difficult it is to expect their kids to blend in at school while also excelling academically during hagwon (private cram school) sessions.

Mothers also feel worried about their children’s safety since they’re constantly on the move.

“When kids reach elementary school,” says Lee Sam-sik, head of the Low Fertility and Aging Society Response Planning Group at the Korea Institute for Health and Social Affairs, “they’re sent to four to five different private education institutes. Parents freak out because they get worried about their kids’ safety.”

Lee Won-gil, deputy head of the Research Institute of Healthcare Policy, says most mothers quit their jobs in December, right when the fall semester ends, or in March, when the spring semester begins.

Of the 20 trillion won ($17.2 billion) set aside from last year’s state budget to tackle the country’s staggering birth rate, around 11 trillion won, or 53.8 percent, was used on child care, which primarily goes to children in day care centers or kindergartens.

In contrast, only 352 billion won, less than 0.01 percent, was spent on various after-school programs.

But many working moms rely on after-school classes to fill up their children’s after-school schedule, leading experts to say the low budget is one clear indication that the government isn’t trying enough.

Lee Sam-sik of the Korea Institute for Health and Social Affairs argues that the Education Ministry thinks of the classes as a form of “nursery service,” which is why authorities aren’t paying much attention.

“The programs should be understood as an extension of formal education,” says Lee, adding that the school should hire trained educators to run the extra classes and find better ways to improve the overall system.

Even with after-school programs and cram schools, some working moms fret over whether they can get along with other moms.

This is especially important since these relationships often affect how well their children get along with their classmates at school.

Ms. Kim, mother of a 2nd grader in Yangcheon District, southwestern Seoul, confides how her daughter was an outsider in school last year due to her own passiveness in attending school meetings.

At the time, Kim had given birth to her second child and wasn’t physically ready to be more active in school activities.

“Moms usually get together after school, and their kids hang out with each other nearby,” says Kim, who wished not to be identified by her full name.

One time, her daughter’s classmate threw a birthday party and invited everyone in her class, except only a few kids, including her daughter.

“She was innocent enough to ask if she could come along,” recalls Kim, adding, “but was told that the mother said she wasn’t allowed. She came home crying that day.”

“No matter what it takes, I’m going to make it to every single session this year,” she vows.

Another mom who works as a medical professor at a local hospital admits to granting personal favors for the mother of her son’s classmate.

“She headed the parents’ group and I wanted to get along, so whenever she asked my hospital any questions regarding her health, I answered them myself. But then, at the back of my mind, I wondered whether I should be working this hard just so that my son could get along with his friends.”

“I had no other choice because I couldn’t make the time for socializing with the other moms.”

Hong Seung-hee, 36, couldn’t find the time either, but what she did instead was leave her former company, a major financial firm, to transfer to a much smaller place, somewhere that didn’t pay as much but guaranteed a friendlier work environment for working moms.

“At my previous workplace, I couldn’t even sign up for maternity leave,” says Hong. “Now, I can look after my kids because I have more flexible work hours.”

She adds, “My life is completely different now.”