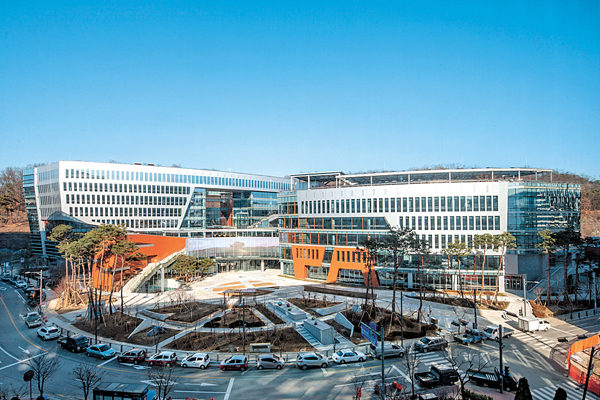 The Pangyo “start-up campus” opened on Tuesday in the Pangyo Techno Valley in Seongnam, Gyeonggi. [MINISTRY OF SCIENCE, ICT AND FUTURE PLANNING]

The Ministry of Science, ICT and Future Planning held an opening ceremony at the Pangyo “start-up campus” on Tuesday.

“I hope that the place will become a proving ground for future-oriented technology such as virtual reality and artificial intelligence,” the president said in an opening speech.

Measuring 54,075 square meters (13 acres), the Pangyo start-up campus boasts the largest size among the government-backed start-up support centers, as the establishment can accommodate up to 200 start-ups. The complex consists of two eight-story buildings and one five-story structure.

While many state-run incubators tend to provide only passive support such as working space and one-time mentoring services, the Pangyo center will likely offer more practical help thanks to the existence of on-site accelerators.

One of the larger buildings houses the Yozma Campus, run by the well-known Israeli venture capital fund Yozma Group. When Yigal Erlich visited Korea last year, he made it clear that Yozma will do more than just fund young start-ups.

The chairman expressed his intention to contribute to nurturing an ecosystem for Korean start-ups in cooperation with the government, consulting firms, research institutes and big corporations at home and abroad.

The specialists at the Yozma Campus will help Korean start-ups launch their services abroad and connect them to prominent investors.

A group of partners plans to issue funds to nurture tech entrepreneurs within the second half of this year, though the specific amount has yet to be decided.

The Pangyo start-up campus is considered ideal to spot promising tech start-ups since the area is a hub for young IT ventures and leading gaming companies such as Nexen and NCsoft.

The incubator is also equipped with diverse test beds to facilitate the development of mobile and online services. It includes cloud centers and device labs that enable developers to try their apps on a wide range of mobile devices.

The campus is also home to a big data center where start-ups operating offices nearby can receive advice on how to analyze big data.