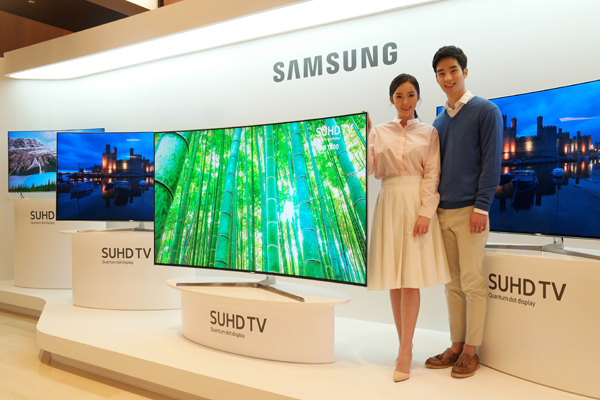 The company said its color accuracy has improved by 25 percent from previous-generation models and that its high dynamic range offers 1,000 nits peak brightness. The higher the nits, the more detail and vivid colors provided by the TV.

“Manufacturers focused on making bigger, thinner and brighter TVs in the past, but the trend has changed to making products that can actually allow customers to become more comfortable with watching them while also having fun,” said Kim Hyun-seok, president of Samsung Electronics’ visual display division at a launch event at the company’s headquarters in Seocho District, southern Seoul.

In order to meet this goal, the company developed a one-for-all remote control, which will work on the TV and other devices. Samsung also attached special panels on its new models to prevent glare.

“One of my friends said that he bought a TV five years ago and that he has no problem with its performance, but I can assure you that the display and many other technologies have developed remarkably and that you will see the differences when you visit stores,” Kim said.

Samsung Electronics will offer a five-year warranty to customers that purchase its KS9500 and KS8500 models by April. Currently, the company’s warranty only covers two years for panels and a year for other parts.