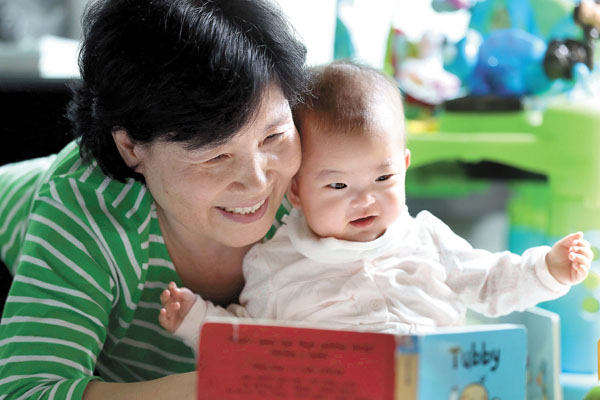 Moon Jeom-ja plays with her 7-month-old granddaughter at her son’s home in Yangjae-dong, Seocho District, Seoul, March 16. Moon lives in her son’s home, babysitting for him and his wife during the week, then returns home to Incheon on weekends. She is registered with the Seocheo Disctrict Office babysitting program. [KIM SANG-SEON]

Ms. Han gave birth to her first child two years ago, and after re-entering the job market as a freelance translator, all seemed right with the world. And when she qualified for the state-run nanny service in December, which many of her colleagues had desperately tried and failed to secure, life seemed sweeter still.

Since then, a nanny has visited her home in Gangseo District, southwestern Seoul, four hours a day, two to three times per week. And Han knows she’s got the luck of the devil, given that competition for the nanny service is so fierce that some parents have had to wait more than a year to receive a nanny.

For those fortunate parents, the government grants subsidies based on their level of income and hires qualified nannies to look after children up to the age of 12.

The enormous popularity of the program is attributable mainly to the peerless quality of its service and its affordability. Han, for instance, paid the nanny 6,500 won ($5.5) per hour, or 300,000 won ($260) per month.

But then, one day earlier this year, the 36-year-old Han was told by officials of the Ministry of Gender Equality & Family, which operates the service, that she could no longer benefit from the program as there is currently a dearth of nannies.

“It crushes me that I can no longer use her,” says Han.

State-authorized nannies are most often women in their 50s or 60s, and as part of their recruitment they undergo elaborate screening procedures followed by a series of training sessions that include coursework in different parenting methods.

While children from low-income, multicultural, physically handicapped families or single-parent households are given priority for the service, the costs for using it vary widely based on the child’s age, number of hours visited by a nanny, and whether or not the child needs special medical care, among several other factors.

But compared to private nannies, who charge about 10,000 won per hour, the state-run service is undeniably far more economical, and as a result, the government is struggling to keep up with demand.

Kim Ga-ro, director of the ministry’s Family Support Division, says the issue all comes down to money, since the ministry simply cannot hire more nannies with its current budget.

After raising the nannies’ hourly pay rate this year from 6,000 won to 6,500 won, parents whose combined monthly income surpasses 5.27 million won were entirely cut off from the subsidies.

For families who then turn to private nannies, the higher costs can become a significant strain.

“I want to have more kids but I’m afraid I might have to quit my job,” says Lee Jun-min, a working mom in Yongin, Gyeonggi. The 36-year-old has three children and spends 2.5 million won on their nanny every month, nearly half her and husband’s combined income.

“I can’t quit my job because then all my work experience would go down the drain.”

According to a 2013 report on the domestic labor market, compiled by the Korean Labor & Income Panel Study, an average Korean woman in her 30s earn 2 million won per month. Operators of nanny agencies claim their clientele are primarily focused on that age group.

Ms. Yun, a working mom in Seongnam, Gyeonggi, paid 1.8 million won for her live-in nanny, who looks after her first child, now 3. When she recently gave birth to her second child, the expense increased to 2.3 million won.

“I’m waiting until my second child gets into day care,” says Yun, conveying her hopes that the center will likely take on the nanny’s current role and require a lesser fee.

“I tell myself I’m just going to use a nanny until then.”