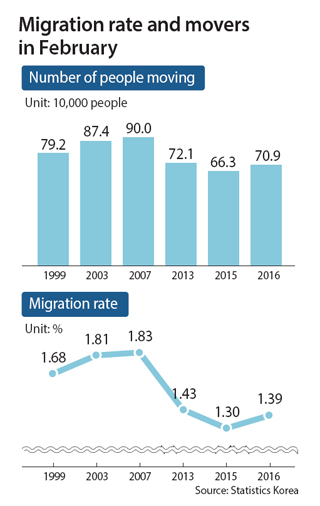 Seoul saw the biggest number of people moving out of the city in February, largely due to the growing number of inner-city redevelopments and the financial burden of jeonse, or lump-sum deposit rent contrast.

According to Statistics Korea on Thursday, more than 709,000 people relocated last month, 6.9 percent or 46,000 more compared to a year ago.

As people moved out of Seoul, the number of people moving into neighboring Gyeonggi grew. The net inflow of people moving in was 9,794, as 175,465 people relocated to the province, whereas 165,671 moved out. This was more than twice the 4,325 net people that moved in a year ago.

Sejong was the second city to see the net inflow of people relocating grow at 4,506, although it was a drop from 7,941 a year ago.

The study showed Koreans left large cities because of the high rents and shortage of apartments.

A government report released in January showed that last year, 43.9 percent of those who relocated moved to find cheaper homes, while 20 percent said they moved because of their jobs.

Jeonse has been one of the major issues in the last year, especially in Seoul. Last month, the nationwide average jeonse price rose 5.33 percent from a year go to 198.4 million won ($170,000). However, Seoul saw a sharper increase of 7.78 percent, while jeonse prices in Daegu grew as much at nearly 7 percent, according to KB Kookmin Bank’s monthly report. The jeonse price in Sejong slightly dipped 0.36 percent during the same period.