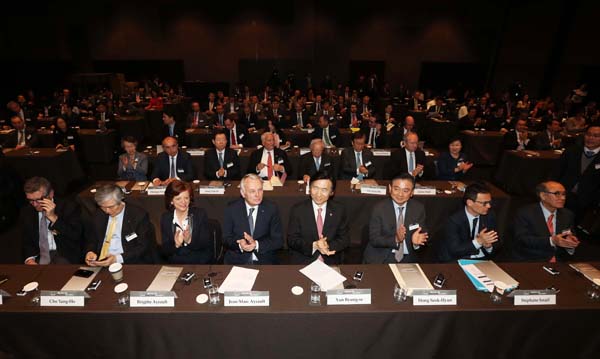 The Korea-France Leaders Forum kicks off Thursday at the Hotel Shilla in central Seoul to discuss the theme of “The Present and the Future,” as the two countries mark the 130th anniversary of bilateral ties. From left: Henri Loyrette, former director of the Louvre Museum and French chair of the preparatory committee for the Korea-France Year; Cho Yang-ho, chairman of Hanjin Group and Korean chair of the committee; Brigitte Ayrault and Jean-Marc Ayrault, the French foreign minister; Yun Byung-se, the Korean foreign minister; Hong Seok-hyun, chairman of the JoongAng Ilbo and JTBC and president of the Korea-France Club; Stephane Israel, CEO of Arianespace; and Lee Hong-koo, former Korean prime minister. [KIM SANG-SEON]